PORTLAND, Ore.  – A U.S. judge in Oregon on Tuesday granted a preliminary injunction blocking a Trump administration proclamation that would require immigrants to show proof of health insurance to get a visa. 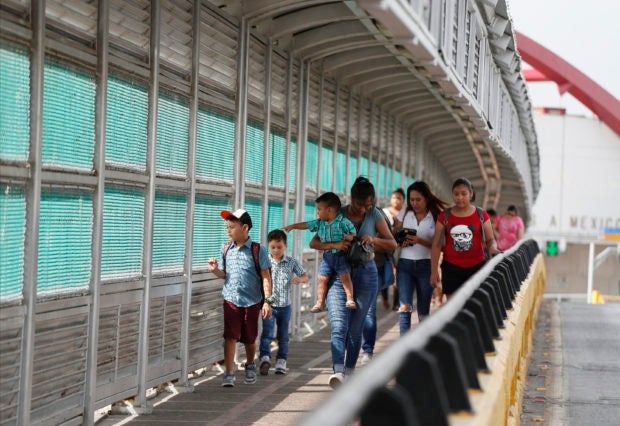 FILE – In this June 28, 2019 file photo, local residents with visas walk across the Puerta Mexico international bridge to enter the U.S., in Matamoros, Tamaulipas state, Mexico. A U.S. judge in Oregon on Tuesday, Nov. 26, 2019, granted a preliminary injunction blocking a Trump administration proclamation that would require immigrants to show proof of health insurance to get a visa. (AP Photo/Rebecca Blackwell, File)

U.S. District Court Judge Michael Simon said in a written opinion that the proclamation could not take effect while a lawsuit challenging its constitutionality makes its way through the courts.

The proclamation issued by President Donald Trump in October would only apply to people seeking immigrant visas from abroad — not those in the U.S. already.

Seven U.S. citizens and a nonprofit organization sued to prevent the rule from taking effect, saying it would block nearly two-thirds of all prospective legal immigrants.

The lawsuit also said the rule would greatly reduce or eliminate the number of immigrants who enter the U.S. with family sponsored visas.

“This decision is an important check on the Trump administration’s effort to rewrite our nation’s immigration and health care laws in violation of the boundaries set out in the Constitution,” said Esther Sung, an attorney with the Justice Action Center.

The White House has previously said it strongly disagreed with Simon’s decision to block the proclamation from taking effect, declaring it “wrong and unfair” for a judge in a single court district to issue a ruling that could shut down a nationwide policy.

Simon previously issued an emergency temporary restraining order on Nov. 3 in response to the lawsuit and heard oral arguments before issuing Tuesday’s opinion.

Under the government’s visa rule, the required insurance can be bought individually or provided by an employer, and it can be short-term coverage or catastrophic.

Medicaid doesn’t count, and an immigrant can’t get a visa if using the Affordable Care Act’s subsidies when buying insurance. The federal government pays for those subsidies.

The uninsured rate for immigrants dropped from 32% to 20% from 2013 to 2017, since the implementation of the Affordable Care Act, according to the institute.

There are about 1.1 million people who obtain green cards each year.

Earlier this year, the administration made sweeping changes to regulations that would deny green cards to immigrants who use some forms of public assistance. The courts have blocked that measure.