First protester dies in Colombia unrest as marches press on 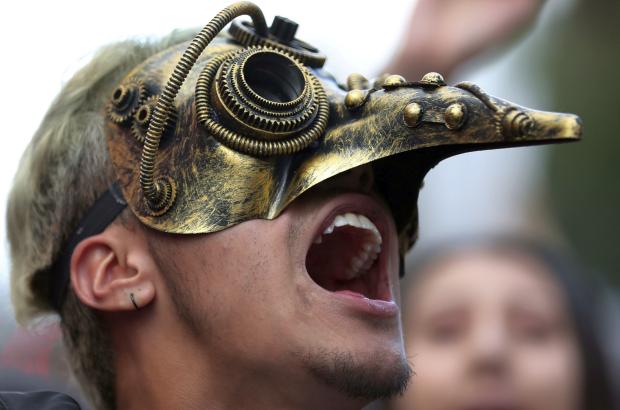 An anti-government demonstrator shouts during a protest in Bogota, Colombia, Monday, Nov. 25, 2019. Authorities are maintaining a heightened police presence amidst scattered unrest in the aftermath of a mass protest that drew about 250,000 to the streets Thursday. (Photo by Fernando Vergara / AP)

BOGOTA, Colombia — Students, women’s activists and indigenous people marched through the center of Colombia’s capital Monday in a fifth day of protests against the government as the country recorded the first death of a demonstrator.

Dilan Cruz, an 18-year-old high school student, died two days after being hit in the head by a projectile reportedly fired by riot police during a protest. His case has resonated in Colombian society, touching off a debate about excessive use of force and making him a symbol for many young protesters.

“It hurts,” said Melissa Ceballos. She said Cruz was a friend who died “for asking for changes, for wanting for things to improve for Colombians.”

As news of his death spread, protesters began gathering to bang pots and pans while chanting “The state killed him!” on the Bogota street where he was wounded.

President Ivan Duque expressed his condolences on Twitter, saying in a statement that he was “profoundly saddened” by Cruz’s death and had shared his solidarity with the family. Duque has promised a swift investigation of the incident in which Cruz was injured.

Colombia has been rattled by protests since Thursday, when an estimated 250,000 people took to the streets amid a strike organized by unions, student groups and indigenous organizations.

The protest was the largest Colombia had seen in years, and it has been followed by dozens of smaller demonstrations as well as looting that resulted in the deaths of three people and prompted authorities to impose a curfew in Bogota for the first time since 1977.

The unrest comes after mass anti-government demonstrations erupted in Ecuador, Bolivia and Chile. Those outbursts caused leaders in Ecuador and Chile to propose changes in economic policies and forced Bolivia’s president to resign.

Some Colombian protesters say they have been inspired by the events elsewhere in the region.

“The people have awoken” said Julio Pardo, a social sciences teacher who attended Monday’s march in Bogota. “We will no longer allow our leaders to humiliate us.”

In response to the growing unrest, Colombia’s president launched a “national dialogue” Sunday to address such issues as rural violence, environmental policy and “growth with equity.”

Duque met with recently elected governors and mayors Sunday night and held talks with business leaders and some unions Monday.

He also invited the National Strike Committee, a steering group that jumpstarted the protests to talks on Tuesday. But its leaders said Duque had only offered to spend one hour with the group, and they refused to attend.

“In one hour we cannot expose our grievances” said Diogenes Orjuela, president of the Central Workers Union. “Under those conditions we cannot start talks.”

Members of the steering committee said they want a greater say over any overhaul of the pension system and labor laws as well as a tax reform plan that the government recently presented to the congress.

They have also called for more funding for public universities and are demanding a ban on fracking, a method for drilling oil which Duque has said he is open to.

It’s not clear, though, how much success the movement will have in pressing its demands.

Sergio Guzman, director of Colombia Risk Analysis, said that while protests have been steady, they have drawn only a few thousand people since Friday and momentum could fade as the holiday season approaches.

“The only way for the strike committee to get an upper hand over the government is if they intensify pressure on the streets,” Guzman said. “If they can’t do that, they will have to lower their list of demands.”

The government sought to keep order by arresting more than 160 people in the first two days of protests.

On Monday, Colombia’s immigration agency initiated the deportation of 59 Venezuelan nationals who were arrested by police for allegedly conducting “acts of vandalism” during the protests.

Officials tried to fly the Venezuelans to Puerto Inirida, a remote border town in the Amazon jungle, but residents who feared the group would stay there prevented the plane from landing by occupying the town’s airstrip.

The immigrants were then taken to a military base in Puerto Carreño, another town on the border with Venezuela that has limited road access to the rest of Colombia. Officials plan to drop them off at a Venezuelan village on the other side of the Orinoco River.

“We want to make it harder for them to return to our country,” said Christian Kruger, director of Colombia’s immigration agency.

Read Next
Albania quake death toll up to 16, more than 600 hurt
EDITORS' PICK
BREAKING: 3,226 latest COVID-19 cases bring PH’s total to 106,330
A gem of a residence in the new normal
Been there, done that but what’s the difference between MECQ and GCQ?
Smart 5G goes live
Water remains our saving grace right now
PNP: Checkpoints back in MECQ areas
MOST READ
You’re my ‘idol’ in crafting laws, neophyte senator ‘Bato’ tells Drilon
MECQ guidelines in infographics
Lacson takes up cudgels for health workers ‘threatened’ by Duterte
MECQ in NCR, other areas: Mass transportation suspended, quarantine pass required anew
Don't miss out on the latest news and information.