Wife burns husband’s car because it was dirty, charged with arson 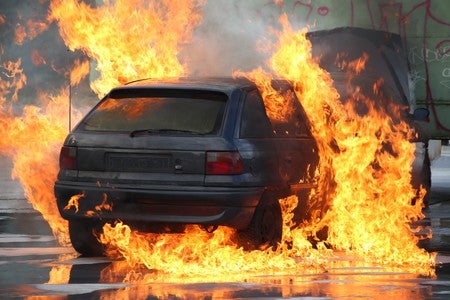 A woman was arrested for setting her husband’s car on fire in a parking lot in Ohio, United States, because it was dirty and had a faulty wheel.

Stephanie Carlson started the fire in a parking lot of a Walmart department store on Nov. 16, as per NBC-affiliate WFMJ last Wednesday, Nov. 20.

Security footage showed smoke already stemming from the vehicle as the 40-year-old approached it and appeared to pour gasoline on the car. As Carlson ran away from the vehicle, flames immediately appeared.

Police and fire authorities were later called to the scene at around 3:30 p.m. The reporting officers noted that Carlson had been acting strange.

She initially told police that the fire began due to lighting a candle to get rid of the smell of a can of gasoline in the car’s trunk, the report stated. However, Carlson later admitted that she poured gasoline over the car’s seats and used a lighter to start the flames.

When asked about the reason for her action, she said it was because the vehicle was dirty and that one of its front wheels had a problem. Police also pointed out that Carlson’s clothes had smelled of gasoline.

According to the report, the vehicle belonged to her husband, who was said to be looking for her all day.

Upon Carlson’s arrest, police found a lighter and mothballs in her purse. Her husband told authorities that she had allegedly been huffing paint thinner along with the mothballs.

There were no injuries from the incident, as per report, but the parking lot had been damaged.  Carlson was charged with arson, inducing panic and criminal damage. JB

Read Next
Lebanese businessman to give Hitler hat to Israeli foundation
EDITORS' PICK
Congress urged to extend session for approval of COVID-19 response bills
Amid protests, Trump talks of war — and reelection
Cherry Mobile teams up with Cloud Panda PH, launches online store
DOH: COVID-19 mortality doubling time, transmission rate down
Leveling up your ‘lutong bahay’ with the kitchen companion you never knew you needed
Restaurant dine-in operations approved in MGCQ areas
MOST READ
Binay dares DOTr execs to commute to work during GCQ
51 percent of German firms holding back investments in PH, but not because of COVID-19
Cole Sprouse arrested while joining peaceful protest against racism
Chaos as thousands return to work in Metro Manila
Don't miss out on the latest news and information.