PARIS  – At least nine people have died after heavy rain slammed the Riviera coasts of France and Italy, trapping travelers in their cars, and caused flooding in parts of Greece. 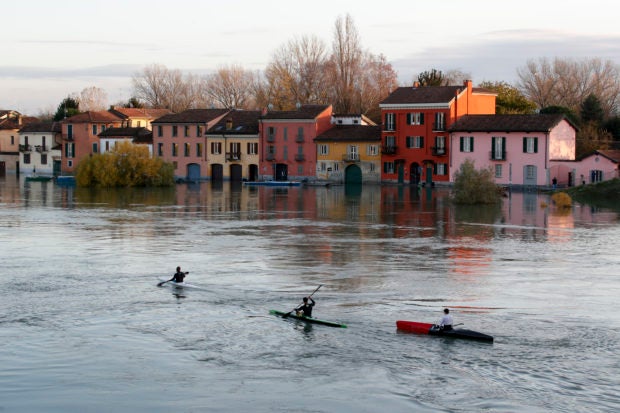 Canoeists sail their way as water reaches the houses after the Ticino river overflowed its banks, in Pavia, Italy, Monday, Nov. 25, 2019. Officially say at least seven people died as heavy rain slammed the Riviera coasts of France and Italy, trapping travelers in their cars, as well as parts of western Greece. Some roads remained closed Monday on the French Riviera, and rivers were still rising in Italy after the weekend flooding. (AP Photo/Antonio Calanni)

Some roads remained closed Monday on the French Riviera, and rivers were still rising in Italy after the weekend flooding.

The administration for France’s Var region said four people died, including a couple in their 70s from the perfume capital of Grasse whose car got submerged. Another died after a French rescue boat sank in the Mediterranean and another was found dead in a car.

In Greece, the bodies of the two men believed to be tourists were recovered late Sunday and early Monday near the port of Antirio, 250 kilometers (155 miles) west of Athens after a sailboat they were using was caught in the severe weather.

Another two women died when storms hit the country’s eastern Aegean Sea islands late Monday, state ERT TV said. The one died when her basement room on Rhodes flooded, while the other drowned on the island of Kos when she went for a swim in stormy seas.

And in northern Italy, a woman was found dead after the Bomida river swept away her car. Rescuers are also searching for possible victims after a landslide caused the collapse of a stretch of an elevated highway near the flooded city of Savona.

Firefighter commander Emanuele Gizzi told SKY TG24 Monday that “we still don’t have the certainty that there is absolutely no one” missing.

Drivers who witnessed the collapse were able to stop in time. There were no reports of witnesses seeing vehicles fall with the roadway, but the search continued as a precaution.

The collapse of the raised highway, just 15 months after a deadly bridge collapse in Genoa, has raised concerns anew about the safety of Italy’s highways, a large part of which are viaducts traversing mountainous terrain.

Meanwhile, the level of the Ticino River in the Lombard city of Pavia was continuing to rise, flooding streets by about 15 centimeters and forcing some residents to evacuate.

In Greece, hundreds of homes were flooded following an overnight storm that affected areas west of Athens.

Torrential rain and mudslides caused the closure of the highway linking the Greek capital to the western port city of Patras.

The worst flooding occurred at the seaside resort of Kineta, where mudslides came from a nearby forest fire-damaged hillside. Several dozen people trapped in their cars and in flooded homes were rescued by the Fire Service.

Read Next
Conan the dog gets hero’s welcome at White House after raid
EDITORS' PICK
10 Filipinos positive for COVID-19 in UK, 7 in Ireland — envoy
Nograles: Cabinet members to donate 75% of monthly salary to aid COVID-19 fight
Quick chat with Nicole Andersson: ‘You really don’t need much to be happy’
IATF to LGUs: Issue ordinances vs attacks on frontliners, COVID-19 patients
Diokno to Duterte: OK to make fun of buck tooth, but focus on people’s needs first
Robredo spox thanks Duterte for defending VP’s efforts vs COVID-19
MOST READ
Coronavirus hotbed Rizal to shut borders on April 6
ADB warns PH against prolonged lockdown
Gov’t mulling quarantine period extension of 15-20 more days
Sotto on Isko Moreno’s call: We do our job without the media following our every move
Don't miss out on the latest news and information.