Rubiano called on Pasay police chief Col. Bernard Yang to resolve the cases which, except for two, were reported only on social media by the victims’ families.

The Inquirer recorded at least nine missing persons — eight men and a woman between 15 and 23 years old. All of them disappeared between Nov. 20 and 22.

Except for being residents of Pasay City, they seemed to have nothing else in common. Three of them were from Barangay 14 where they were also last seen: Norealle “Ikoy” dela Torre Butiong, 21; Gil Josh Ramirez, 18; and Leogee Tiposo, 23.

The two youngest victims, 15-year-old Reine Louisse de Ocampo and 16-year-old Kojie “Lucky” Marquez, were friends. Marquez disappeared in front of a fast food restaurant in Pasay Rotonda around 6:30 p.m. on Nov. 20 while De Ocampo left their house around 5 p.m., their families told the police.

John Samuel Esguerra, 19, was with his girlfriend, Niña Jane Ignacio, also 19, when they both went missing on Nov. 20.

Another victim, Roujen Serban, 21, was last seen on Nov. 21 in Barangay 15 where he lived. On the other hand, 22-year-old Sebastian “Baste” Montoya was forced into a van by at least six still unidentified men around 6 p.m. on Villaruel Street on Nov. 22. The incident was captured by a closed-circuit TV camera.

Montoya’s sister, Alyssa Sonata, said one of the men even placed his arm on Montoya’s shoulder while another was gripping his back as they forced him to get into a Toyota Hiace van with plate number AEA 1051.

The van was last seen plying the streets of Libertad (Arnaiz Avenue).

A check with the Land Transportation Office, however, showed that the vehicle’s license plate had been issued to a Toyota Vios.

“We want these [cases] resolved immediately to ease the anxiety and uncertainty of their relatives,” Rubiano said.

“Let’s be careful and avoid risks by going to the police,” she advised the relatives, adding, “The Philippine National Police is on top of the situation, and I am confident that they have the resources and manpower to solve these crimes,” she added.

Yang said they were still verifying the reports by talking to the victims’ relatives. Those with any information about the missing persons can call the Pasay police at 88311544 or 0918-3696565. 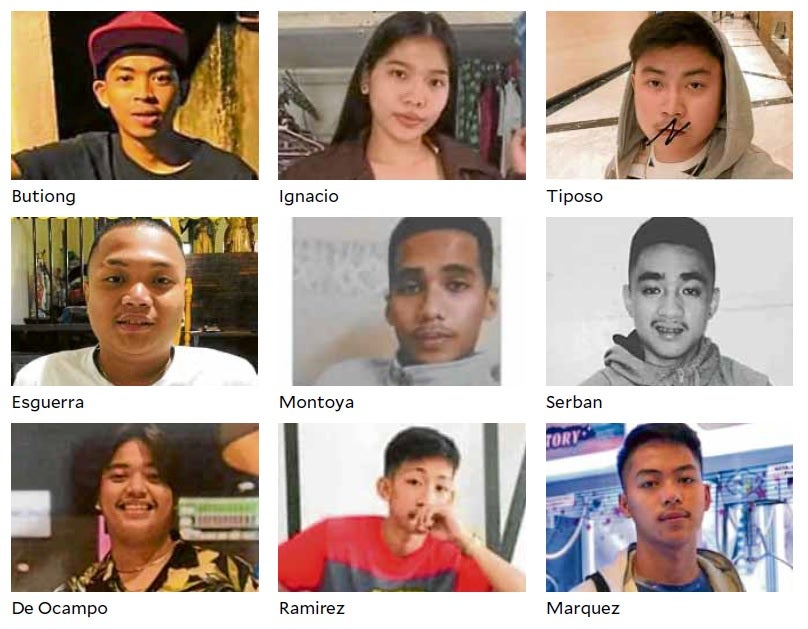