For a few hundred dollars, tools and some elbow grease, you can make your own rifle or handgun. It’s all perfectly legal — and it can be done without leaving anything behind for the government to trace.

These “ghost guns” have long been popular among hobbyists or gun enthusiasts. But gun-control advocates say they are increasingly popping up in crimes, used by people who are prohibited from buying a firearm and are trying to circumvent a background check.

“Whatever the hobbyists think about it, criminals are taking advantage of this,” said Nick Suplina, managing director for law and policy at Everytown for Gun Safety, a gun-control group funded by former New York City Mayor Michael Bloomberg.

“These firearms directly undercut federal and state law designed to keep guns out of the hands of people who shouldn’t have them,” he added.

Last week, a teenager used a homemade handgun to fatally shoot two classmates and wound three others at a school in suburban Los Angeles, authorities said. He shot himself and later died.

He was too young to legally own a gun in California. It’s not immediately clear how he acquired the firearm — a .45-caliber, 1911-model replica pistol assembled from gun parts with no serial number. 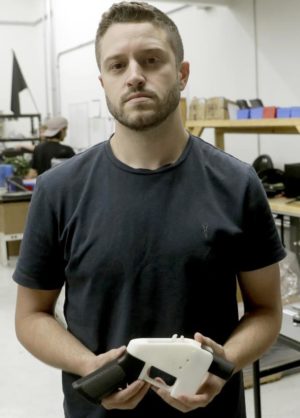 In this photo, taken Aug. 1, 2018, Cody Wilson, with Defense Distributed, holds a 3D-printed gun called the Liberator at his shop, in Austin, Texas. For a few hundred dollars, tools and some elbow grease, you can make your very own rifle or handgun. It’s all perfectly legal — and it can be done without leaving anything behind for the government to trace. These so-called ghost guns have long been popular among hobbyists or gun enthusiasts. But gun-control advocates say they are increasingly popping up in crimes, used by people who are prohibited from buying a firearm and are trying to circumvent a background check. (Photo by Eric Gay / AP)

The boy’s father was described as an avid hunter who died two years ago. He had six registered guns, but officials found several other unregistered firearms in the home after the shooting and were working to determine their history.

There are several ways to make your own firearm, some requiring more knowledge than others — from building each piece and then assembling it with the use of high-tech machines and tools to buying a kit online and assembling the gun with minimal machinery required. There also are some people who use a 3D printer to create the “receiver” — the essence of a firearm — that houses its critical components.

Plenty of online companies sell what are called 80 percent receivers, which are nearly finished and require just a bit of drilling to be usable. They don’t have a serial number and don’t require a background check.

There have even been so-called build parties — sometimes promoted on social media — where people construct firearms together.

It’s legal to make your own firearm if it’s for your personal use and you don’t intend to sell it.

For some in the gun rights community, it’s considered a constitutional right, part of the Second Amendment that gives Americans a right to possess a firearm. Some want the satisfaction of making something from scratch, while others are motivated by libertarian political beliefs and recoil at the government being able to keep tabs on whatever weapons they own.

Larosiere describes himself as a collector who has made quite a few of his own firearms over the years. He says such guns are rarely used in crimes and considers efforts to clamp down on their availability unfair to law-abiding gun owners, driven by false “CSI”-style fears of undetectable guns.

“Is it worth it to eviscerate a new technology and increase the size of our already massive criminal law just to assuage fear, fear with no actual backing in fact? I’d say, probably not,” he said.

Quite a few ghost guns have emerged in high-profile shootings in recent years in California, which has some of the strictest gun laws in the country.

Besides the shooting at the school in Santa Clarita last week, authorities found perpetrators of a 2014 bank robbery in Stockton had a homemade AK-47. The previous year, a man who killed five people on a college campus in Santa Monica had assembled an AR-15 after failing a background check at a gun dealer.

Two years ago, a man who killed his wife and four others in Northern California had been prohibited from possessing a firearm because of a restraining order. He had handed over a 9 mm handgun but then made two rifles at home and used them in the attack.

“Now, not only is it available, it’s easily available,” he said.

Manger has been at legislative hearings about measures to clamp down on gun parts and heard opponents saying they don’t want the government to know what weapons they own.

“As a cop, I’m telling you, I hear that, and I get a chill,” he said. “People want these guns because they want to be invisible to government and to law enforcement.”

Though it’s become much easier to stay anonymous as technology has advanced, it’s not always cheaper. With sales for AR-platform rifles slumping, prices have dropped considerably, and it’s usually cheaper to buy one from a dealer than make one.

But for some firearms, such as the Israeli Galil-style rifle, it might cost about $300 to buy the parts and more than $1,000 to buy one from a dealer.

“If you can use a drill, you can manufacturer a gun largely in 15 minutes,” said David Chipman, a retired agent with the federal Bureau of Alcohol, Tobacco, Firearms and Explosives and now senior policy adviser for the Giffords gun control group.

“We’re far from the days of 20 years ago where if you don’t have a friend who has a machine shop, you can’t do this with tools you have in your home,” he said.