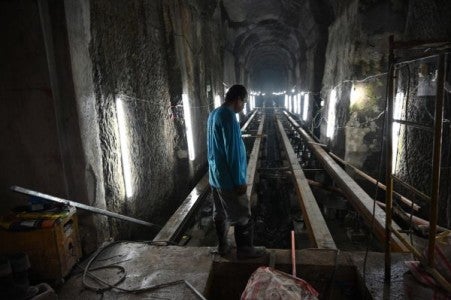 A worker stands near the entrance of the El Deposito, a Spanish-era water reservoir being rehabilitated for tourism, in San Juan town, suburban Manila. Image: AFP/Ted Aljibe

Vaulted ceilings and rows of stone columns stretch into the humid darkness deep below the Philippine capital, where workers are transforming a more-than-century-old underground reservoir into a draw for tourists.

The sparks of welding guns illuminate the damp contours of El Deposito, an abandoned Spanish colonial-era relic with a rich history that has been hidden from view for decades.

“(El Deposito) has a very colorful history that we Filipinos must appreciate and value even after all these years,” Kaye Oliveros, curator for the soon-to-be-opened site told AFP.

Crafted from volcanic rock and completed 137 years ago, the underground cavern was made to hold 14 million gallons (53 million liters) of water, which was pumped through iron pipes into thousands of homes until the early 20th century.

Japanese forces drained the cavern during World War II and used the tunnels as an ammunition dump. American forces destroyed El Deposito’s above-ground structures as they retook the Philippines in 1945.

The reservoir fell into neglect after the war, turning into a dumpsite and even being invaded by squatters over the next half-century.

In 1973 the government declared the site a national shrine, and in 2016 a four-year cleanup started.

Construction crews have been working to finish a metal walkway and other infrastructure that will welcome visitors when the site is due to open to the public in February.

The opening comes in the run-up to the 500th anniversary in 2021 of explorer Ferdinand Magellan’s arrival in the Philippines during the first successful circumnavigation of the Earth.

He claimed the archipelago for Spain, which would rule the Philippines as a colony for nearly the next 400 years.

The reservoir, which was built toward the end of Spanish control, was a major advancement for the residents of Manila.

Before then, water was scooped out of the river and delivered to the capital’s homes by porters lugging large clay jars.

“We always think the Spaniards treated us so badly at that time, but somehow they have given us the (means) to provide clean water for Filipinos,” Oliveros said. IB/JB

Of Filipino horror movies, a video rental shop, and our need to scream