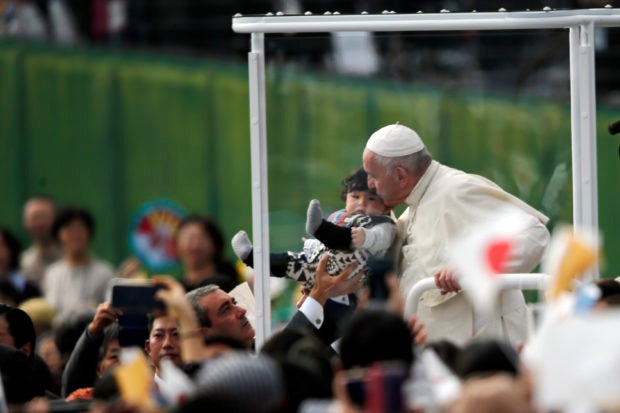 Pope Francis kisses a child in his popemobile as he celebrates a Mass at Nagasaki Prefectural Baseball Stadium, Sunday, Nov. 24, 2019, in Nagasaki, Japan. (AP Photo/Kiichiro Sato)

NAGASAKI, Japan — Pope Francis rode in a carbon-free popemobile at his Mass in Nagasaki, an appropriate choice in line with his environmental concerns.

Organizers said Pope Francis used a Toyota hydrogen-powered Mirai, customized with a stand and handrails. He will use a similar model while in Tokyo.

The pope held a big Mass at a Nagasaki city baseball stadium. Earlier Sunday, he demanded world leaders renounce atomic weapons and the Cold War-era doctrine of deterrence; and paid respects at a memorial for the 26 martyrs.

Environmental protection is one of Pope Francis’ key agenda items and is also part of the theme of his Japan visit.