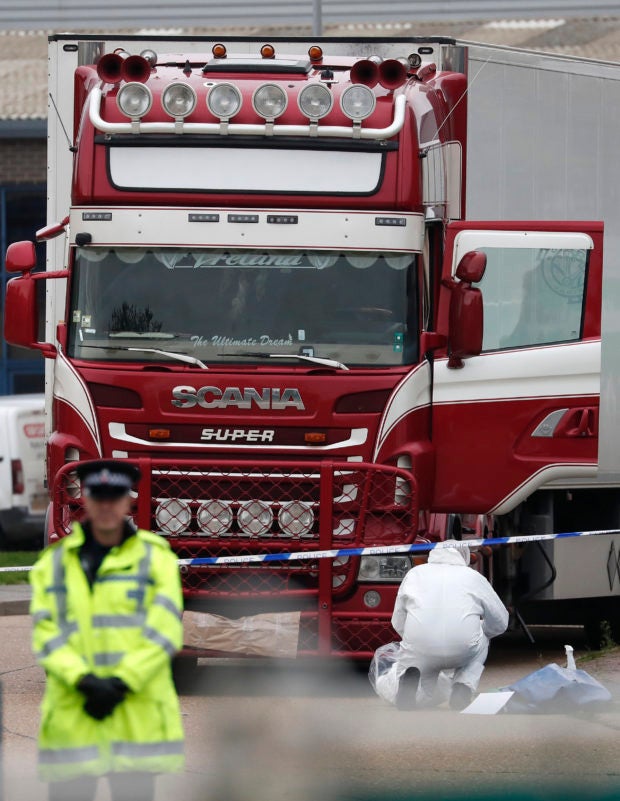 In this photo taken on October 23, 2019, police forensic officers attend the scene where a truck found to contain a large number of dead bodies was discovered in Thurrock, South England. – British prosecutors have charged a 23-year-old man from Northern Ireland in the deaths of 39 people from Vietnam, police say Sunday, November 24, 2019. (AP File Photo/Alastair Grant)

LONDON — British prosecutors have charged a 23-year-old man from Northern Ireland in the deaths of 39 people from Vietnam whose bodies were found in a refrigerated container truck last month.

He is scheduled to appear in court on Monday.

The bodies were found October 23 in the English town of Grays.

British police have already charged 25-year-old Maurice Robinson, a truck driver also from Northern Ireland, with 39 counts of manslaughter and conspiracy to traffic people. They said he drove the cab of the truck to Purfleet, England, where it picked up the container, which had arrived by ferry from Zeebrugge in Belgium.

Another suspect is being held in Ireland.