Duterte off to Busan for Asean-ROK summit 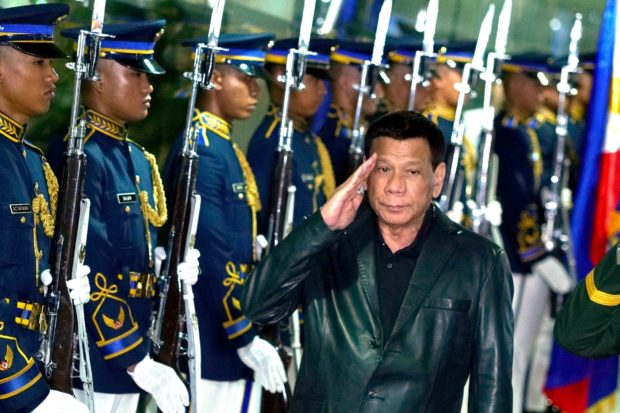 In this file photo ,President Rodrigo Roa Duterte gives a salute as he walks past the foyer guards prior to his departure at the Ninoy Aquino International Airport for his three-day official visit to the Republic of Korea on June 3, 2018. – Duterte again leaves for South Korea on Sunday, November 24, 2019, to attend the two-day Asean-ROK Commemorative Summit in Busan. KING RODRIGUEZ/PRESIDENTIAL PHOTO

Duterte’s plane took off from the Davao International Airport.

The President is also set to meet South Korean President Moon Jae-in at the sidelines of the two-day summit from November 25 to 26.

Philippine Ambassador to South Korea Noe Albano Wong earlier said the agreements to be signed by the two governments were still being finalized, but South Korean Ambassador to the Philippines Han Dong-Man previously said memoranda of understanding (MOUs) on education cooperation, social security, cooperation on fisheries, and tourism implementation were expected to be signed during Duterte’s Korea visit.

FEATURED STORIES
NEWSINFO
Duterte’s threats vs ABS-CBN not literal – Panelo
NEWSINFO
More sacked as witness details ‘Pastillas’ scam
NEWSINFO
Dela Rosa to Espenido: ‘Stop talking’ or get out of PNP
The Department of Foreign Affairs also noted that Duterte could push through with his plan to source guns and military equipment from South Korea during his visit.

The following were among Duterte’s entourage to the Asean-ROK summit: