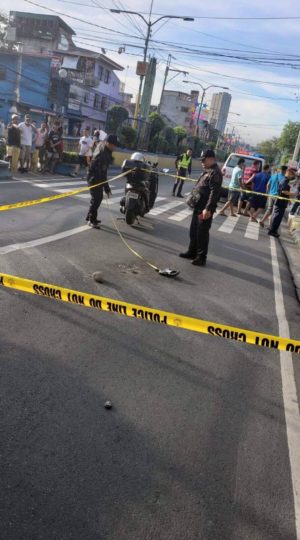 MANILA, Philippines — One man was killed while two others were wounded after a grenade planted underneath the motorcycle of a police officer went off Sunday morning in Mandaluyong City.

Police Staff Sergeant Aldin Saligo of the Station Drug Enforcement Unit of Mandaluyong City was on his way to the Operations Office of Mandaluyong City Police Station using his motorcycle when he heard something drop from his vehicle, the National Capital Region Office said in a news release.

The policeman got off his motorcycle and then it soon exploded along Martinez Street, southbound of Botanical Garden in Mandaluyong City around 6:30 a.m., leaving one dead and two bystanders wounded.

Investigation revealed that Saligo had been receiving death threats before the incident in connection to his work as a drug operative, NCRPO said.

“The Eastern Police District’s SOCO and Explosive Ordnance Division are now processing the crime scene and the pieces of evidence,” it said.

The chief of police of Mandaluyong City, Col. Remigio Sedanto, is giving “all possible forms of assistance” to the victims and their families.