‘Special treatment’ of Ampatuans adds to pain of victims’ kin 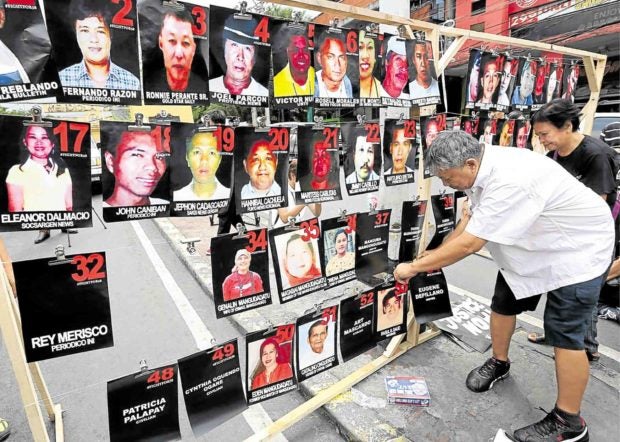 NO JUSTICE FOR 10 YEARS A makeshift shrine at Mendiola in Manila pays tribute to the 58 people, including 32 journalists, who were killed in the Maguindanao massacre on Nov. 23, 2009. The case heard at the Quezon City Regional Trial Court is set for judgment on Dec. 10. —MARIANNE BERMUDEZ

AMPATUAN, MAGUINDANAO —The massacre of 58 people, including 32 media workers, happened in this province 10 years ago. But for the victims’ families, the memory of the tragedy remains fresh because of their continuing quest for justice.

Jhan Chiene Maravilla vividly recalled a scene in a morgue with a body awaiting autopsy. It bore dozens of bullet wounds; its eyes, mouth and brains had been blown off. She was 12 then.

She remembered freezing when she realized she was seeing the corpse of her father, Bart Maravilla, the chief of reporters of Bombo Radyo in Koronadal City. It was the first and last time she would glimpse his corpse. The coffin was closed to viewers because of the bullet holes that marked what was left of his face and other body parts.

“Only beasts can do that,” she told the Inquirer.

Now 22, Maravilla lamented that not one of the almost 200 people implicated in one of the Philippines’ infamous crime cases had been convicted.

“Justice in the Philippines moves like a turtle—very slowly,” she said. “It’s been 10 years, and yet the justice we’re yearning for remains elusive. Ten years is a very long time.”

The promulgation of the case was earlier set on Nov. 20, or three days before the massacre’s 10th anniversary. But Quezon City Regional Trial Court Judge Jocelyn Solis-Reyes, citing the huge volume of evidence, asked for a 30-day extension, which the Supreme Court granted.

Maravilla and other family members of the slain media workers were unhappy with the extension. “At most, I was expecting a guilty verdict for the principal suspects on or before Nov. 23,” she said.

On Nov. 17, the families of the media workers again visited the site of the massacre—their annual ritual in the past 10 years—to dramatically press their demand for justice.

As in past years they offered a Mass, and laid flowers and lighted candles at the markers erected in honor of their slain loved ones.

The victims’ children performed a theater act that drew tears from the 100-strong audience.

“We ask for only one thing: justice,” Malabanan, who was 15 at the time of the massacre, said in Filipino. “Why is it so hard to give? Are they blinded and silenced by money? We have been suffering for 10 years.”

The list of the accused in the case is led by members of the powerful Ampatuan clan, which ruled Maguindanao for at least a decade: former Maguindanao Gov. Andal Ampatuan Sr., who died in custody, and his sons Zaldy, former governor of the Autonomous Region in Muslim Mindanao; Andal Jr., former mayor of Datu Unsay town, and Sajid, former vice governor of Maguindanao.

Zaldy and Andal Jr. are being held at the Taguig City Jail, while Sajid is out on bail. Sajid, who has been found guilty of graft, malversation and 63 counts of falsification of public documents, for a total jail term of 556 years, won the 2019 mayoral race in Shariff Saydona Mustapha. He has appealed the guilty verdict.

At the massacre site, the mourners burned huge photographs of the Ampatuan brothers. Each photograph bore the words “Justice now! Convict Ampatuan.”

Maravilla expressed resentment at the special treatment supposedly being enjoyed by Zaldy, who through a court order, was able to attend his daughter’s wedding at a posh hotel in August 2018.

“That he was allowed to go outside to attend a party really sucks given that he is accused of heinous crimes,” she said.

“Is he suffering from a serious ailment?” Mangudadatu said, pointing out that medical treatment outside jail must be covered by a court order.

Mangudadatu’s wife, Genalyn, and a number of his female family members were among those killed in the massacre.

The victims were en route to Shariff Aguak town to file Mangudadatu’s certificate of candidacy for governor, virtually challenging the Ampatuans’ grip on power. The media workers were covering the filing; the other civilians killed only happened to pass the road at the time.

Mangudadatu was vice mayor of Buluan town at the time of the massacre.

“It’s been too long a wait already,” he told the Inquirer. “I have no doubt that the principal Ampatuan suspects are behind the massacre. We have overwhelming evidence and witnesses to pin them down for the ghastly crime.”

Mangudadatu did not complain about the extension granted to Judge Reyes, again expressing confidence at the conviction particularly of the principal suspects.

“We have waited for 10 years,” he said. “Thirty days are shorter than 10 years of waiting. I&apos;m sure there is a plausible reason for the request [for extension], and we yield to the wisdom of the Supreme Court in approving it.”

Fr. Rey Carvin Ondap, executive director of the Passionist Center for Justice, Peace and Integrity of Creation, assured the victims’ families that the Catholic Church would not falter in the quest for justice.

“We in the Church will not be silent. We will continue to make noise until justice is given to the victims,” the priest said. “The Church will be here for you and we hope that as Christians, as bearers of hope, we will achieve justice for the victims someday.”

Said Maravilla: “I terribly miss Daddy. The absence of justice in such a long time makes it even more painful for us.”