TAPPING TECHNOLOGY Dean Apistar from the conservation group Rare (left photo) teaches a fish trader in Libertad town, Antique province, how to use the OurFish app. Through this technology, tuna trader Maribel Mateo (right photo) can do away with pen and paper and instead keep digital records of her transactions. The app also allows traders to take photos of unlisted fish species for
reference in future deals. —PHOTOS BY JOCAS A. SEE/RARE

As dawn breaks, a flotilla of tuna fishing boats starts chugging toward the shores of Libertad town in northern Antique.

“Ga-parada sa lawod (They’re parading at sea),” fish buyer Maribel Mateo describes the daily spectacle in front of her house in the coastal village of Tinigbas.

When a fisher arrives, her husband Gary heaves the tuna on the weighing scale and the couple begins a familiar routine: setting the price, putting down the details in a notebook, and giving a piece of paper to the fisher for his record of the transaction.

This morning is different, as Maribel will be testing a new app that promises to take the hassle out of fish trading. It’s called OurFish, and Dean Apistar from the conservation group Rare is teaching her the basics of trading fish in the digital age.

Using a smartphone, Maribel selects the species of fish from a photo gallery, records the volume and price, and adds the name of the fisher. In just half an hour, she had listed seven fishers and recorded more than 300 kilos of tuna worth P24,000 in the app.

“OurFish replaces traditional recording methods and eliminates the need to rely on memory,” says Apistar, who started introducing the app to fish traders in the Philippines last summer. It automatically calculates the amount that the buyer needs to pay the fisher, and even keeps a record of expenses or debts owed for fishing necessities, such as fuel and ice.

Fish traders in Libertad and 10 other municipalities where the app was first tested are lucky, as they will find it easier to comply with the amended fisheries code’s requirement for buyers to report fish catch in the future, adds Apistar. With a systematic data collection in place, both government and fishing communities can manage fishing grounds better.

With an abundance of tuna from April to June, and mackerel from November to February, Libertad’s fish catch could be recorded more accurately with data from the app and reports from enumerators in fish landing areas. “We have observed that fishers are getting more and bigger fish. This could be the impact of our marine sanctuaries,” Paulino adds.

By October, more than 2,600 fishers and 23,780 kilos of fish catch had been recorded during the pilot phase. While most app testers found it useful, however, there were users who experienced problems with deleted files and internet connectivity that prevented them from syncing data, reported Apistar. 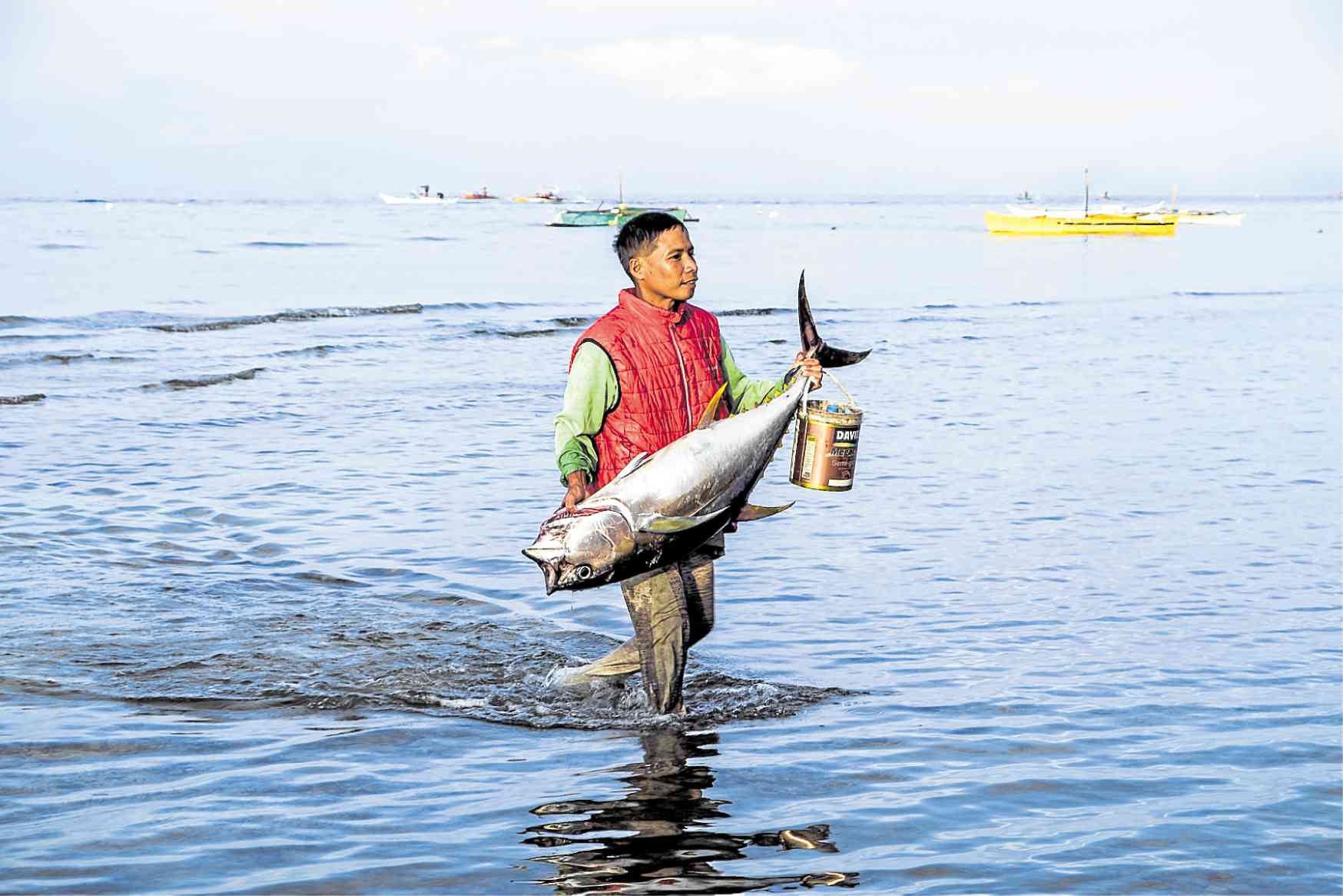 PANDAN BAY BOUNTY During tuna season, fishers in Pandan Bay in northern Antique bring home a bountiful catch, thanks to their efforts to protect localmarine resources.

App users in southeast Sulawesi province in Indonesia, where it was launched much earlier, gave positive reviews to OurFish creator George Stoyle during a meeting last September. They spoke in Bahasa Indonesia, with translation assistance from Rare Indonesia staff.

“It eases my workload,” says fish trader Nurlini, who ships at least one box of octopus a day to exporters in the city all year round. “Pages from a notebook can get ripped off or my children could play with it. A smartphone app is better because it categorizes my inputs automatically and splits the balances at once,” she added.

With the app serving as bookkeeping ledger for both fisher and buyer, they are able to analyze the transactions to maximize income and keep track of their catch to prevent overfishing.

Hartono, a fishing community leader in Wakatobi national park and the only app user who is not a trader, says his group is using OurFish as a fisheries management tool.

“I share it with 27 other fishers who report their fish catch so we can gather data about our fisheries. We are able to compare our fish catch from month to month, and we are now comparing the data with our records from previous years,” Hartono observed.

The Indonesian fishers, however, pointed out similar challenges as those seen in the Philippines. With many coastal villages in Sulawesi found in remote areas, the fishers experienced the same problems in terms of lost files and uploading of data.

Responding to the feedback, Stoyle says his team is working on making the app more user-friendly and fun to use in the seven countries where it has been launched. They are also adding more functions, such as linking traders with buyers in other areas.

“Our main goal is to see how fish stocks are changing over time and, depending on the data, to determine the best strategies that would help fish populations recover,” Stoyle says.

For fish buyers, the app can also be beneficial in entering the formal economy. In Honduras, fish trader Zulma used the recorded digital transactions to obtain a loan from a bank. It was the first time she had ever accessed funds from a formal financial institution, and her OurFish app records proved sufficient to establish her creditworthiness.

With continued use of the app, fish traders in the Philippines who are often short of capital can have the same experience as Zulma in the future.

Read Next
This week’s festivals
EDITORS' PICK
IATF to LGUs: Issue ordinances vs attacks on frontliners, COVID-19 patients
10 Filipinos positive for COVID-19 in UK, 7 in Ireland — envoy
Nograles: Cabinet members to donate 75% of monthly salary to aid COVID-19 fight
Diokno to Duterte: OK to make fun of buck tooth, but focus on people’s needs first
Robredo spox thanks Duterte for defending VP’s efforts vs COVID-19
Quick chat with Nicole Andersson: ‘You really don’t need much to be happy’
MOST READ
Gov’t mulling quarantine period extension of 15-20 more days
Sotto on Isko Moreno’s call: We do our job without the media following our every move
Cook more and eat less: Tips on your quarantine diet
ADB warns PH against prolonged lockdown
Don't miss out on the latest news and information.