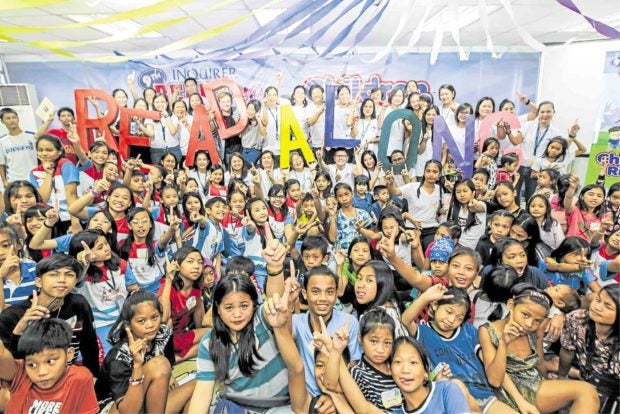 FOR THE CHANGE WE NEED Participants at the 9th Inquirer Read-Along Festival on Friday define by their confident stance the theme of the two-day event that saw celebrities reading empowering stories about children doing their share to change the world. The festival continues on Saturday at the Inquirer’s Makati office. —LEO SABANGAN II

Children have the power to change the world.

The message, from Philippine Daily Inquirer president and CEO Sandy Prieto-Romualdez, kicked off an interactive session of the ninth Inquirer Read-Along Festival at the Inquirer’s Makati City office on Friday.

“If there is a superpower that the kids have, it’s that sense of wonder, sense of determination and being 100-percent focused on seeing what can be achieved, rather than seeing what the barriers and hurdles are toward that goal,” Romualdez said.

This year’s festival, a two-day event held in celebration of National Reading Month, carries the theme, “Children Rising,” in honor of the youth who has been the core of Inquirer Read-Along.

The festival’s second day on Saturday will culminate with five students vying for the title of Festival King or Queen in the storytelling competition finals round.

Launched in 2007, the Inquirer Read-Along is a corporate social responsibility (CSR) project of the company which aims to promote love of reading among children.

Romualdez, a staunch advocate of reading, narrated the story of “Super Ningning.” Written by Liwliwa Malabed with illustrations by Kara Dandan-Albano, the story tells of a girl who fights bullies in school by making new friends and being kind to people.

“Reading is something that we need to invest in. I love that this is our ninth festival,” said Romualdez, who also thanked Inquirer volunteers, school partners, foundation partners and sponsors “who have been there from the very beginning and have carried on the advocacy of reading.”

Echoing the festival’s theme of celebrating children who rise above all odds to achieve their dreams, Tumulak read “Si Ching na Takot sa Dilim,” by Aleli Dew Batnag, about the girl’s constant fear of the dark and how she overcomes it and discovers light amid darkness.

Liwag read “Bisnesboy Minggoy,” which was written by Augie Rivera and illustrated by Liza Flores. The story, about a boy who dreams of owning a bicycle but does not have the money to buy one, shows how business savvy can make dreams come true.

“When you want something, you have to work hard for it,” said Liwag, a first-time storyteller. Knowing the concept at an early age will surely be an advantage among children, he added. 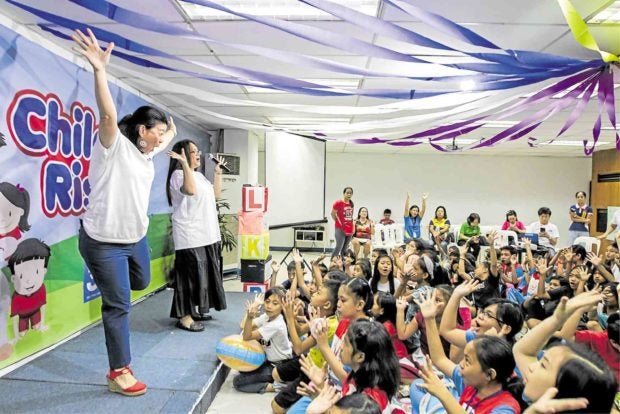 HOORAY FOR KIDS’ SUPER POWER A jaunty Sandy Prieto-Romualdez, Inquirer president and CEO, greets young guests at the 9th Inquirer Read-Along Festival on Friday at the Inquirer office in Makati City. About 200 children joined the interactive sessions of the two-day festival with “a sense of wonder, determination and 100-percent focus on what can be achieved,” which Romualdez said are part of their “superpower.” —PHOTOS BY LEO SABANGAN II

Rodriguez and Develos did an animated reading of “Ang Mahiyaing Manok,” written by Rebecca T. Añonuevo and illustrated by Ruben de Jesus. The story tells of a shy rooster that learns to come out of the shadows and remains confident.

Tumulak, an Inquirer Read-Along ambassador who advocates reading through her passion project, “Push to Read,” said she hopes children will go beyond the constant use of electronic gadgets, a disturbing trend seen in the crucial early years of childhood.