Duterte: No need for EO to ban use, importation of e-cigarettes | Inquirer News

Duterte: No need for EO to ban use, importation of e-cigarettes 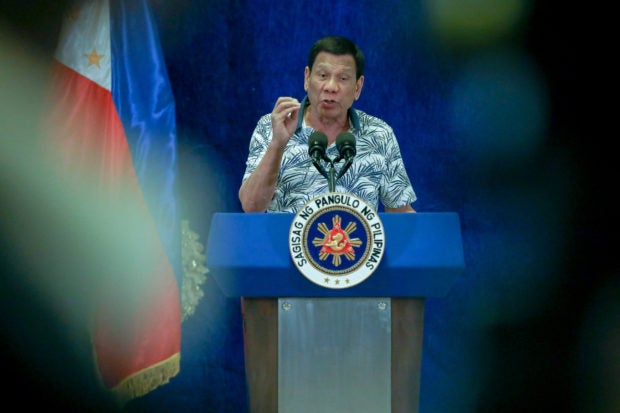 MANILA, Philippines—President Rodrigo Duterte has defended his order to ban the importation of electronic cigarettes and its use in public places, noting that he doesn’t have to put in writing as there’s already an existing law prohibiting the use of hazardous chemicals.

Speaking at the inauguration of a coal-powered power plant in Maasim, Sarangani, Duterte insisted that vaping is illegal by the basis that it contains nicotine, which according to him, is a substance prohibited by law.

He, however, did not identify which law he was referring to.

“Now, there’s a law regarding the use of nicotine. I do not have to issue an executive order. Paka-bobo naman itong mga g*** na ito [They are so stupid],” Duterte said.

“If you use vaping in public, there is nicotine. And so without the other chemical combustion there, you are already violating the law in vaping because it contains nicotine,” he added.

The President, likewise, said that his order to ban the importation of e-cigarettes is anchored at the Consumers’ Protection Act.

“Now, why am I ordering its confiscation? Because it is thrown to the consumers and under the Consumers’ Protection Act, if the thing that they — we are importing is prohibited by the place where it was made, then automatically it is also not good and it is should — should be by operation of common sense,” he explained.

Duterte also called the Integrated Bar of the Philippines (IBP), the national organization of lawyers in the Philippines, “ulol” (crazy) for their comments regarding his directive.

The IBP earlier said anyone can challenge Duterte’s verbal order to ban vaping in public places before the courts.

Duterte has warned judges not to oppose his ban by issuing restraining orders against the police and Bureau of Customs.

But IBP president Domingo Cayosa stressed that Duterte’s warning should not stop judges from doing their jobs, citing the separation of powers stated in the Constitution.

Duterte earlier announced he will issue an executive order soon to formalize the ban. But even without the papers, the Philippine National Police have started arresting those who used vape in public and confiscate their e-cigarette paraphernalia.