SAM PHRAN, Thailand — Pope Francis tended to the needs of Thailand’s tiny Catholic hierarchy Thursday, urging priests and nuns to find ways to communicate the faith with “a Thai face and flesh” in an overwhelmingly Buddhist country.

Thousands of Thais welcomed Pope Francis as he traveled to St. Peter’s Parish, a Catholic community outside Bangkok, to pray at the sanctuary of Thailand’s first martyred priest.

There, he told a few hundred priests and nuns that he read “with some pain” that for many Thais, Christianity is “a religion for foreigners.”

“This should spur us to find ways to talk about the faith in dialect, like a mother who sings lullabies to her child,” he said. “With that same intimacy, let us give faith a Thai face and flesh, which involves much more than making translations.” 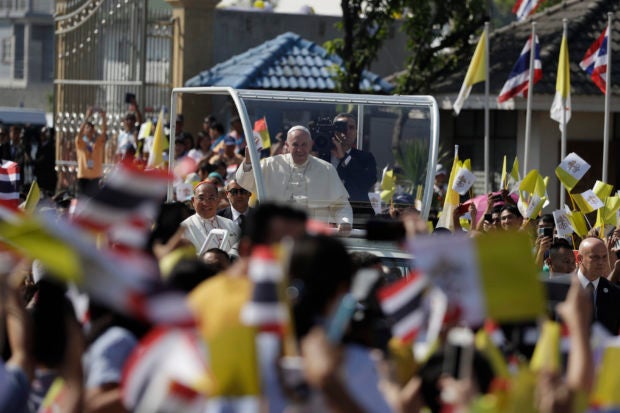 Children dressed as monks and nuns, as well as real-life religious and ordinary Catholics,  cheered him as he passed through the crowd outside the church in his popemobile and later on foot. “Viva il papa,” or “Long live the pope,” they shouted in Italian.

It was the first time in a generation that Thais have seen a pope up close, after St. John Paul II became the first pope to visit Thailand in 1984.

“It’s been 35 years so everyone is so very happy,” said Tuangsin Pureepaswong, a 60-year-old research engineer from Rayong province. “May the Holy Father pray to God for us all.”

Pornnutcha Kruprasert, a 14-year-old training to be a nun from southern Prachuap Khiri Khan province, said she was “excited and delighted” to see the pope.

“The pope always has good thoughts for all youths,” she said cheerfully. “We can bring his teachings into real life.”

After meeting with clergy and nuns, Pope Francis was meeting with members of his own Jesuit order and bishops from across Asia to encourage them to spread the faith as their missionary predecessors did.

In the afternoon, he attends an interfaith encounter, where he’s expected to highlight areas where Catholics can cooperate with Buddhists, Muslims, and members of other Christian denominations.

Pope Francis wraps up the day with a Mass dedicated to young people at Bangkok’s Cathedral of the Assumption. He leaves Saturday for Japan for the second and final leg of his trip.

At the end of his first full day in Bangkok on Thursday, Pope Francis celebrated Mass for an estimated 60,000 people at Bangkok’s national sports stadium. There he denounced the “humiliation” of women and children forced into prostitution – a reference to human trafficking and poverty that help fuel the region’s sex tourism industry.

In addition to Thais, Catholics came to see the pope from Vietnam, Cambodia and even China.

She said she teared up when she finally saw Francis.

“I was overwhelmed,” she said. “My heart is overwhelmed. It is the first time in my life.”

She said Pope Francis’ visit is particularly important for young Thais, to learn and think about their faith “and see that religion is something precious.”

Read Next
MMDA to motorists: Cooperate with stop-and-go scheme for SEA Games
EDITORS' PICK
PH COVID-19 cases near 19K mark, as recoveries breach 4,000
Cherry Mobile teams up with Cloud Panda PH, launches online store
Año vows intensified anti-drug campaign as lockdown eases
South Korea clamps down again as virus rebounds
Senate probe on status of PH internet connectivity amid ‘skyrocketing’ demand pushed
Leveling up your ‘lutong bahay’ with the kitchen companion you never knew you needed
MOST READ
Calida ‘just the lawyer, not the client’ and must ‘never lose his cool’ – Macalintal
7 members of nurse’s family in Laguna catch COVID-19
PH COVID-19 cases near 19K mark, as recoveries breach 4,000
Amid protests, Trump talks of war — and reelection
Don't miss out on the latest news and information.