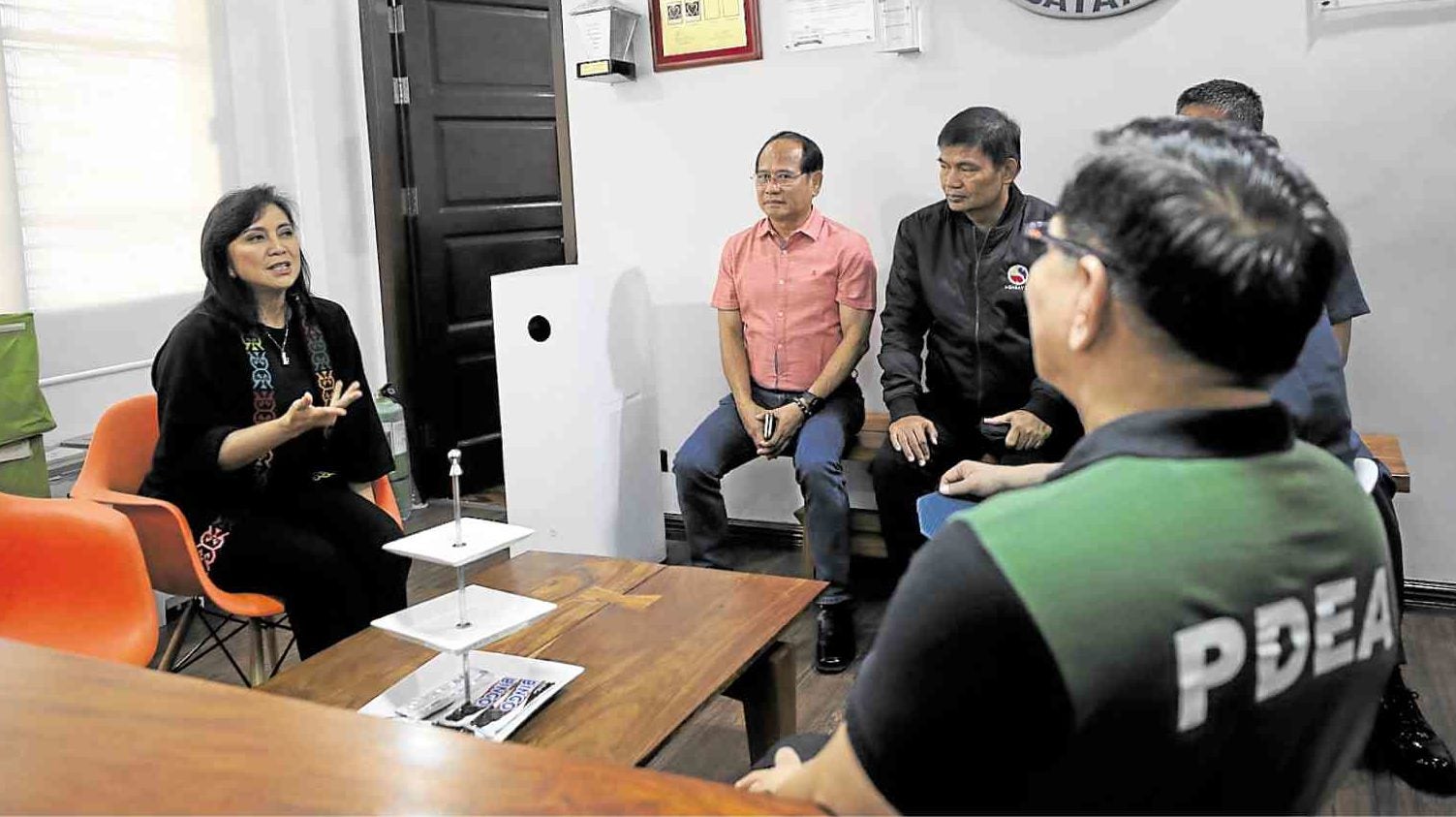 DRUG TALKS Vice President Leni Robredo, cochair of the Inter-Agency Committee on Illegal Drugs, enjoys the support of the members of the counter narcotics body, according to Lt. Gen. Archie Gamboa, the acting national police chief. Robredo is shown above talking with Philippine Drug Enforcement Agency chief Aaron Aquino and regional and provincial law-enforcement officials
during her visit to Dinalupihan, Bataan province, on Thursday. —PHOTO FROM OFFICE OF THE VICE PRESIDENT

The Duterte administration may have given Vice President Leni Robredo a lead role in the war on drugs, but it doesn’t want her to succeed, two senators said on Thursday.

Senate Minority Leader Franklin Drilon said it was clear that the administration wanted Robredo to fail by undermining her plans.

“I think the way things are unfolding, obviously they do not want Leni Robredo to succeed in the manner that she thinks she can,” Drilon said in a television interview.

Sen. Panfilo Lacson, an adviser to Robredo on the war on drugs, said being given a responsibility without the corresponding authority was a “formula for failure.”

“You will not succeed because you were given a big responsibility without authority. How will you reconcile what you will do?” Lacson said at a news forum in the Senate.

Robredo’s position has become “untenable,” he said, though he believes she has been on the right track by holding consultations with the agencies she will work with since accepting her appointment as cochair of the Inter-Agency Committee on Anti-Illegal Drugs three weeks ago.

“As of now, I don’t see any missteps or violations she committed,” Lacson said.

There could just have been misinformation when the President claimed that she invited an international prosecutor to investigate him.

President Duterte told a news conference in Malacañang on Tuesday night that he could not trust Robredo because she was with the political opposition and as such he could not appoint her to the Cabinet.

It was only three weeks after he, according to his spokesperson Salvador Panelo, urged all agencies to cooperate with Robredo and promised to give her “everything” she would need to carry out the fight against illegal drugs.

Robredo said she wanted a shift in the counternarcotics program’s view of drug use from crime to health problem and she went on to see US and UN officials for discussions of collaboration in reducing drug demand in the Philippines.

Panelo said the Vice President was doing the right thing and that her consultations were “educational.”

But after Mr. Duterte changed his tune, Panelo said Robredo had made “missteps,” including consulting “enemies of the state” who had prejudged the President’s war on drugs.

In his news conference on Tuesday, the President described Robredo as “scatterbrain” and accused her of “grandstanding.”

Other administration officials also blocked her  request for a copy of the government’s list of high-value targets in the drug war.

Robredo had said she needed the list because she wanted to constrict the supply of illegal drugs.

Staying on the job

Despite the badmouthing and efforts to thwart her, the Vice President said she would stay on in the fight against drugs. But if the President wants her out, he should just tell her, she said.

Lacson again defended Robredo’s request for a copy of the high-value targets list, saying the information was necessary for her to be able to do her job.

Lacson also said he respected her decision to stay on the interagency committee on illegal drugs.

Panelo, however, insisted that Robredo’s election to the vice-presidency did not give her automatic access to classified information.

“Trust is earned. The missteps of the [Vice President] did not inspire confidence in the matter of keeping to oneself classified information,” he said in a statement.

But Robredo, he said, “should not be bothered by the expressed lack of trust by the appointing power with respect to the confidentiality of state matters requiring secrecy.”

“After all, she is tasked to help end the illegal drug trade in the country and not to get secret information of the government to share the same with her foreign and local peers,” he said.

Panelo also took a swipe at former President Benigno Aquino III, who on Wednesday asked what Mr. Duterte’s intentions were in appointing Robredo to the interagency committee on illegal drugs if he did not trust her.

“He is better off focusing on his case pending before the Sandiganbayan, as well as taking care of his health, than touching on a matter related to the dreaded drug menace that he never gave the attention and importance it deserves during his six-year presidency,” Panelo said.

Aquino is no longer facing a case in the Sandiganbayan. In August, the court granted the Ombudsman’s motion to withdraw the graft and usurpation of authority charges against him over his role in the botched police operation to capture a foreign terrorist in Mamasapano, Maguindanao province, in 2015. The terrorist was killed by the policemen, but they lost 44 of their own in a clash with Moro rebels as they withdrew after the operation.

The Philippine National Police still regards Robredo as an ally in the war on drugs despite the President’s lack of trust in her, the acting police chief said on Thursday.

“We would not be attending meetings with the Vice President if we did not support her,” Gamboa said.

Asked if the PNP itself supported Robredo, he replied: “Of course.”