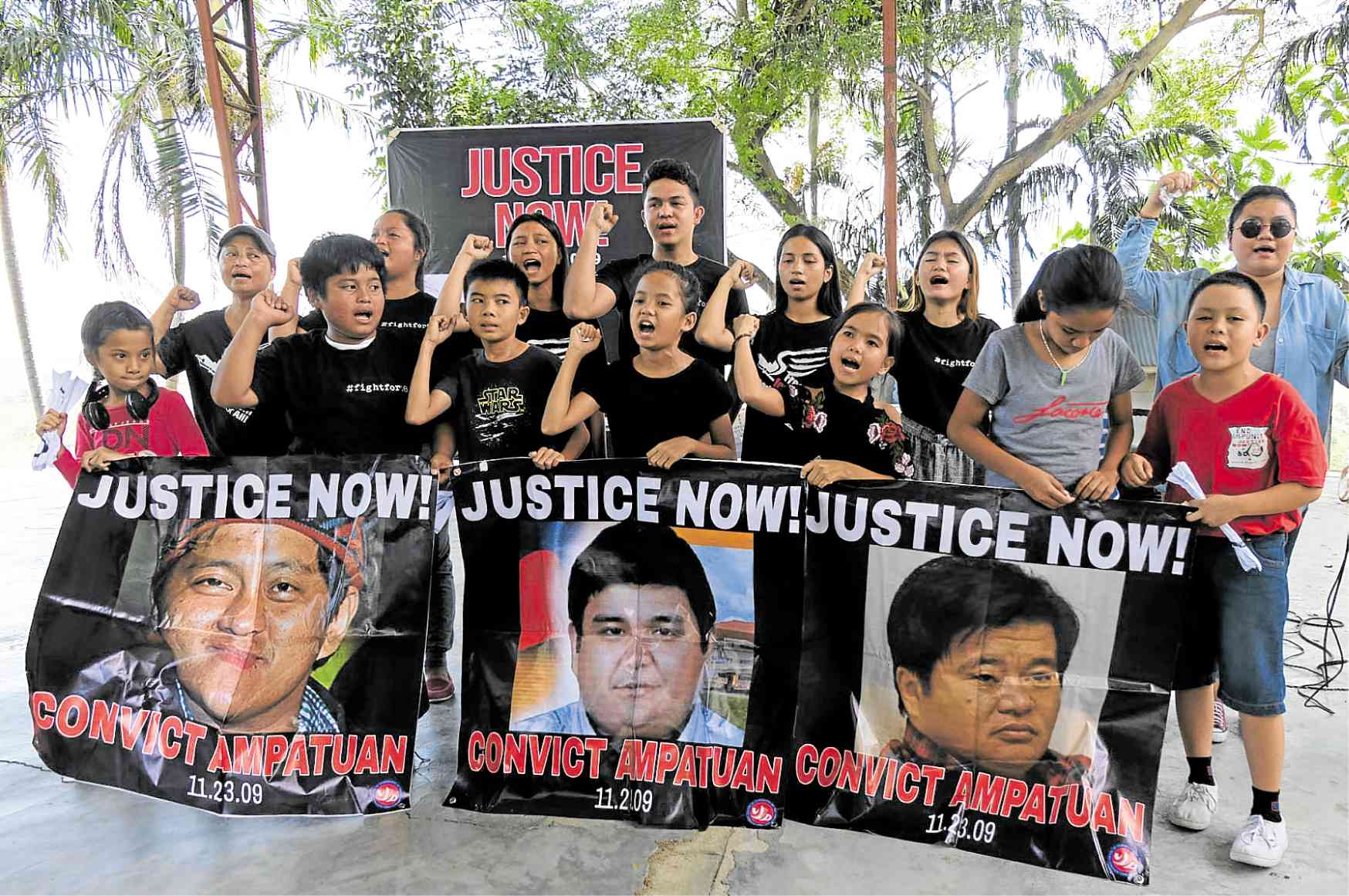 CRY FOR JUSTICE Children of slain media workers mark the 10th anniversary of the Maguindanao massacre with a visit to the site of the killings on Nov. 17.—BONGS. SARMIENTO

Nearly 10 years after the gruesome massacre of 58 people in Maguindanao province, Rep. Esmael Mangudadatu said only a guilty verdict on the Ampatuans and their coaccused would heal his wounds from losing his loved ones.

Mangudadatu’s wife, Genalyn Tiamzon, as well as his aunts and other relatives, were part of a  convoy  that  would have filed his certificate of candidacy for governor against then Datu Unsay Mayor Andal Ampatuan Jr. on Nov. 23, 2009.

The group, which included media workers, was ambushed and killed by around 100 gunmen in hilly Sitio Masalay in Ampatuan town.

“For almost 10 years, the pain is still in my heart,” Mangudadatu said at a news forum in Quezon City on Thursday.

“It’s really hard for me to regain my life and I couldn’t say that I’m in a better state until we can get a conviction,” he added.

The lawyers and families of the massacre victims were expecting Quezon City Regional Trial Court Branch 221 Judge Jocelyn Solis-Reyes to promulgate her decision before Dec. 20, after she was granted a 30-day extension to work on her verdict.

“Ten years is enough and I hope that after the one-month extension, the accused will finally be convicted,” said Mangudadatu.

The congressman said it had not been easy for him to forget the murder of his family and the 32 media workers, believed to have been orchestrated by the powerful Ampatuan clan to target him because of their political rivalry.

During the course of the trial, Zaldy Ampatuan tried to bribe him with P25 million to drop the case but he refused, Mangudadatu said.

At the news forum, the Foreign Correspondents Association of the Philippines (Focap) renewed its “call for a closure that will bring all perpetrators, especially the masterminds, to justice.”

“Convictions of the perpetrators and full recompense of the victims’ families will be a first step in reversing the long and tragic injustice,” the Focap statement added.

The group also called on the government to take effective steps against “political barbarism” and to stop all forms of attacks on and intimidation of journalists.

A letter sent by the Bureau of Jail Management and Penology to the Quezon City court on Tuesday revealed that Zaldy Ampatuan, former governor of the then Autonomous Region in Muslim Mindanao, was still confined at the intensive care unit of Makati Medical Center after suffering a stroke on Oct. 22.