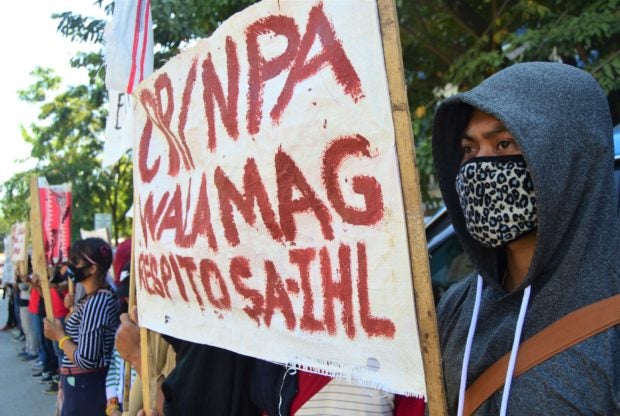 Wearing face masks and holding placards, a group of young men and women stand outside the Hall of Justice as the Philippine Army’s 403rd Infantry Brigade files a case against some members of the New People’s Army for alleged violation of the International Humanitarian Law on Nov. 20. JIGGER J. JERUSALEM

CAGAYAN DE ORO CITY –– The Philippine Army’s 403rd Infantry Brigade has filed a court case against four alleged members of the New People’s Army (NPA), which it claimed violated the international humanitarian law (IHL) during an attack on Manolo Fortich town in Bukidnon on May 28.

The respondents were alleged members of the subregional committees of the NPA’s Guerrilla Front 89 and the NPA’s north-central command, who were allegedly involved in the attack.

In a resolution prepared by the Bukidnon provincial prosecutor, Ramiro Melgo, a member of the barangay tanod in Santo Niño, said he was handcuffed and maltreated by NPA fighters during the May 28 attack.

“He (Melgo) was not armed and not part of the conflict. But he was subjected to cruel and inhumane treatment,” Alonto said.

Brig. Gen. Edgardo de Leon, 403rd Infantry Battalion commander, claimed that by launching the attack in Sitio Aurora, Barangay Santo Niño on May 28, the rebels committed IHL violations, which stated that civilians should be spared in the armed conflict between state forces and the rebels. 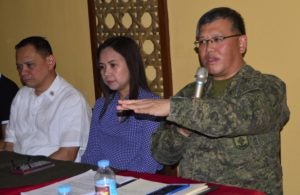 Brig. Gen. Edgardo de Leon, commander of the Philippine Army’s 403rd Infantry Brigade during a press conference after the filing of a case against some members of the New People’s Army at the Hall of Justice in Upper Carmen, Nov. 20. Beside him is Merlynn Uy, the Regional State Prosecutor for Northern Mindanao, and Rommel Alonto, Bukidnon Provincial Prosecutor. JIGGER J. JERUSALEM

De Leon said the rebels fired on village watchmen, captured one of them and “maltreated” the captive as the guerrillas burned vehicles, he said.

The rebels had earlier owned the attack in a statement by Pia Paraiso, an NPA spokesperson.

Witnesses had identified the perpetrators when shown photos of the suspects, De Leon said.

He said the filing of the case was just the first of a series, as the military was compiling reports on the NPA’s other alleged IHL violations, including the destruction of private properties, farm equipment, and vehicles in Bukidnon and other areas.

“We have documented those incidents, we have witnesses. We showed photos to victims and they identified the assailants. They owned up to these atrocities, these attacks on non-military targets. They must answer to these accusations,” de Leon said.

As the case was filed on Wednesday, a group of placard-holding men and women, some of them wearing face masks, stood outside the Hall of Justice in Upper Carmen, to condemn the NPA.