The Land Transportation Office (LTO) said this activity is meant to “prevent more road crash incidents in the future” as well as comply with President Rodrigo Duterte’s directive to strictly enforce the country’s traffic laws.

According to an LTO letter to the National Capital Region Police Office (NCRPO), the President’s “instruction” during a November 4 Cabinet meeting “as relayed by (LTO) Usec. Mark Richmund De Leon” was for the agency and the Highway Patrol Group (HPG) to “not to go into corruption” and “strictly enforce the law.”

LTO particularly asked NCRPO for assistance during the conduct of the “one-time big-time” operation even as it would likewise be carried in other parts of the country.

The “one-time big-time” operation came about as recent incidents of road crashes claimed the lives of more than 30 people.

The letter specifically cited the October 30 road mishap in Apayao where an overloaded elf truck fell into a ravine, killing 19 persons; and the November 6 accident in Camarines Sur where a bus and a UV Express van collided, killing the van’s eight passengers. 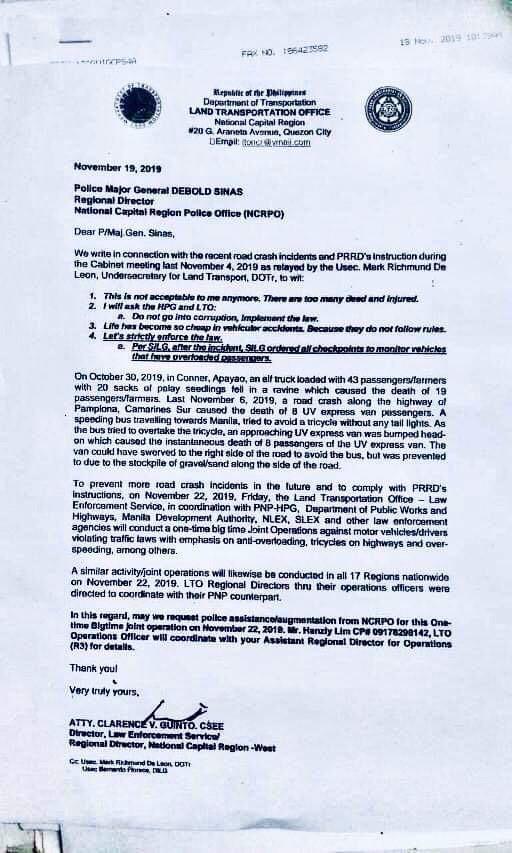 Read Next
PNP: No abuse in arrest of vapers
EDITORS' PICK
Must-know scams to avoid when buying cars
Average new COVID-19 cases daily in NCR down 30%
POVA x Mobile Legends Bang Bang: A partnership that’s built to win
Concepcion: Consider vaccine passes once herd immunity reached in NCR Plus
Pagasa: Brace for hot Saturday weather
Tired of your Wi-Fi signal problems at home? Here’s a solution!
MOST READ
Morales warns vs Sino loans
Pandemic to be ‘far more deadly’ this year, WHO warns
Rabiya Mateo becomes only Miss U candidate with over 1 million Instagram followers
Average new COVID-19 cases daily in NCR down 30%
Don't miss out on the latest news and information.