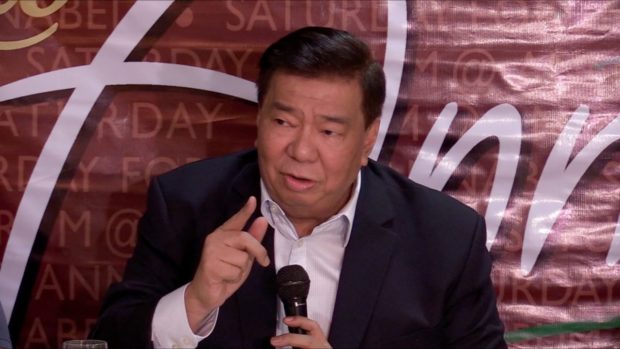 “Although there was nothing illegal about the request, certainly, it was improper or suspect, because you do not propose to realign funds for any purpose other than what is to the public interest,” Drilon said in an interview at the Senate.

Senator Sonny Angara earlier revealed that Faeldon had written a letter to the Senate finance committee, asking for realignment of the funds to his home province Sablayan, Mindoro.

Drilon also questioned Faeldon’s motive for requesting the realignment saying it might be related to the sacked BuCor chief’s previous plans to run for office in Mindoro.

“There is nothing illegal doon sa kaniyang [there in his] request for realignment. But at that time of before the last election, we heard that he was interested in running for an election post in Mindoro,” Drilon said.

“Certainly, to request the realign P1 billion (part of P1 billion) to Sablayan detention facilities in Mindoro is become suspect. In other words, it is not motivated by any desire to improve our detention system but some other motives. Inevitably, the question is: was it related to some political plans that he had in Mindoro?” he added.

In a Twitter post, Faeldon’s lawyer Jose Diño Jr. said the requested appropriation was intended to address the National Bilibid Prison’s (NBP) “over-congestion” by transferring it to Sablayan, Mindoro.

“For balance — requested appropriation was for the transfer of the entire NBP to the nearest penal colony [Sablayan]. This was a proactive response to the perennial issue of over-congestion at the NBP,” Diño said.

President Rodrigo Duterte sacked Faeldon as BuCor chief in September for disobeying his orders not to release convicts of heinous crimes.