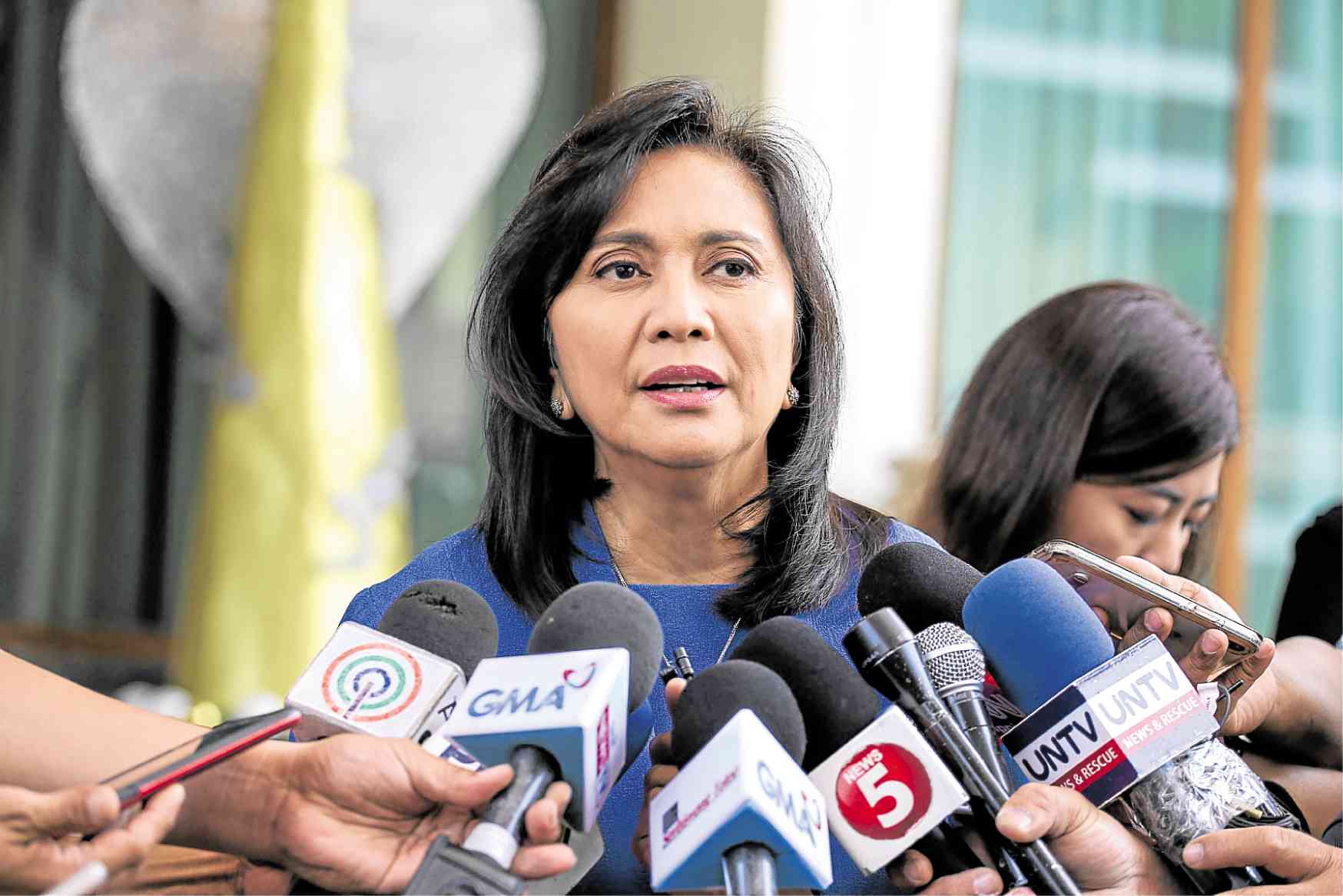 President Duterte has “reservations” about trusting Vice President Leni Robredo with sensitive information because she has made “missteps,” including consulting “enemies of the state” who have prejudged his war on drugs, Malacañang said on Tuesday.

Explaining Duterte’s change of mind about making Robredo a member of his Cabinet, presidential spokesperson Salvador Panelo said the Vice President’s seeking advice from foreign institutions and officials who had called the drug war a violation of human rights and a crime against humanity “did not sit well with the President.”

“The [Vice President’s] actions are all documented in mainstream and social media,” Panelo said in a statement. “These missteps not only derailed [the President’s] well-meaning intent for the Vice President to be part of the administration, but registered red signs that could not be ignored.”

Talking to reporters on Tuesday, Robredo said it did not matter to her if her post was not Cabinet rank.

What matters to her, she said, is that she’s doing her job.

If the President has reservations about trusting her with sensitive information, she said, that’s “not my problem.”

“If they do not trust me, then why did they designate me in the first place?” she said.

Panelo said Robredo’s “insistence on getting access to classified information” the disclosure of which “could imperil the welfare of the Filipino people and the security of the state” added to Duterte’s reservations.

Robredo, who accepted her appointment by Duterte as co-chair of the Inter-Agency Committee on Anti-Illegal Drugs two weeks ago, had asked law enforcers for up-to-date information on the crackdown on narcotics and a list of their high-value targets.

The Philippine Drug Enforcement Agency and the Philippine National Police have refused to give her a copy of the target list, which they hold as classified information.

Panelo said becoming a member of the Cabinet would give Robredo “unlimited access to state matters” that “if transmitted by her, whether purposely or otherwise, could result [in] adverse consequences.”

He cited Robredo’s “tendency to be generous with acquired information and knowledge to others whose predilection may not be in the best interest of the country.”

Panelo, however, said Duterte was not thinking of recalling Robredo’s appointment, as that decision by the President was “not a mistake.”

In a television interview on Monday night, Mr. Duterte said he did not appoint Robredo to a Cabinet post when he made her his drug czar.

He said Robredo had a tendency to “talk right and left,” which might compromise sensitive information that she might hear in Cabinet meetings.

He noted that he and the Vice President belonged to different parties.

Robredo defended her meetings with representatives of foreign organizations, saying the drug problem is “transnational.”

“I do not understand why they are bothered by that. The drug problem, especially where the supply comes from, is transnational. These are often sourced from other countries,” she said. “We cannot constrict the [drug] supply if we do not cooperate with other countries.”

Last week, Robredo met with officials from the US Embassy in Manila, including representatives from the Department of State’s International Narcotics and Law Enforcement Affairs, Drug Enforcement Administration, Federal Bureau of Investigation and US Agency for International Development, for discussions of US counternarcotics programs in the Philippines and possible collaboration in reducing drug demand in the country.

She also met with representatives of several organizations, including the UN Office on Crime and Drugs, and announced plans for talks with interior department, Dangerous Drugs Board and health department officials this week about policy, rehabilitation and reintegration.

On Thursday, Panelo said Robredo was doing the right thing.

“If you were in her place, what will you do? Of course, you have to know the situation first, meet all the people there. Then you will get advice from experts, then you come up with your scheme. That’s only right,” Panelo said.

He also expressed approval of Robredo meeting with US and UN officials, describing it as “educational.”

“There’s a coordination between this government and the American government with respect to that,” Panelo said, referring to the war on drugs. “Just to be informed, she has to inform herself. How can she take the next step if she doesn’t know what’s happening?”

“It’s educational. She doesn’t know anything about it. So that is the right step, knowing what are the facts, what are the agreements and what are you presently doing. How would you make a move if you don’t know the situation [on] your turf?” he said.

In a telephone interview with reporters on Tuesday, however, Panelo said Robredo talking with “certain institutions and people that are supposed to be enemies of the state” was a “dangerous sign.”

Asked to explain “enemies of the state,” he said “any institution that has already prejudged the war on drugs” was “an enemy of the state.”

He also named former Human Rights Watch Asia director Phelim Kine, who has called the drug war “murderous,” and International Criminal Court Prosecutor Fatou Bensouda, who is investigating the thousands of killings in the crackdown, as enemies of the state.

Asked if the Catholic bishops, too, were considered enemies of the state, Panelo said: “Those who think the war on drugs is a violation of human rights and a crime against humanity, those are the ones being referred to by the President.”

He said the President still trusted Robredo, but as for himself, “I’m still waiting for her program, how she will do her job.”

Panelo also said the Vice President did not need access to sensitive information to get a complete picture of the drug problem. Even ordinary people are aware of it, he said.

Robredo said she would “not waste time arguing.”

“I will try as much as I can to get the data that I need, but I understand that it is still their decision whether they will share it with me or not,” she said.

“When I accepted the job, I already knew that there were some aspects I could not control. But I spent all my time in my first two weeks fixing everything I needed for the antidrug campaign,” she said.

‘Fire they can’t put out’

Sen. Panfilo Lacson, a former Philippine National Police chief and now also an adviser to Robredo on the campaign against narcotics, said the Vice President had been put in a no-win situation.

Speaking in a television interview on Tuesday, Lacson said Robredo would have been beset with criticism had she refused her appointment to the interagency committee.

Now that she had accepted it, some would ask if the President’s offer had been a ruse, he said.

It seems that she has been doing things that others are not prepared for, Lacson said.

“And now it appears to be some kind of a fire they could not contain or put [out],” he said. —REPORTS FROM JULIE M. AURELIO, MEG ADONIS AND LEILA B. SALAVERRIA