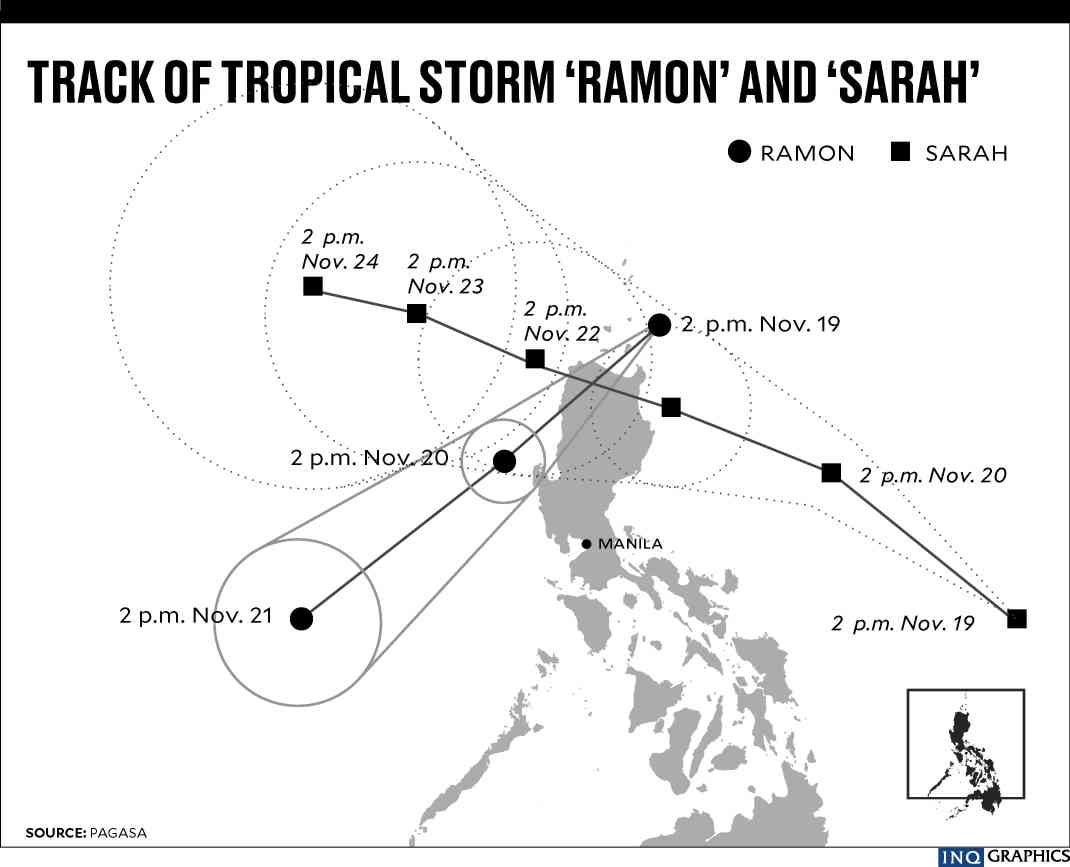 People in northern Luzon should brace for a weather double whammy this week, as Typhoon “Ramon” (international name: Kalmaegi) and Tropical Depression “Sarah” both threaten to bring heavy rain and strong winds in provinces in the region, the weather bureau warned on Tuesday.

The Philippine Atmospheric, Geophysical and Astronomical Services Administration (Pagasa) also warned residents of La Union and Pangasinan provinces of a possible storm surge by Wednesday due to Ramon, with wave heights that could reach up to 2 meters.

The provinces of Batanes, Apayao, Kalinga, Abra, Ilocos Norte, Ilocos Sur and the rest of Cagayan had been placed under signal No. 2.

As of 4 p.m. on Tuesday, Ramon was 120 kilometers east of Calayan in Cagayan province. It packed maximum sustained winds of up to 120 km per hour near the center and gustiness of up to 165 kph.

But following its forecast track, Ramon was expected to hit land between Tuesday night and Wednesday morning, blowing over Cagayan, Apayao and Ilocos Sur provinces.

Rueli Rapsing, chief of the provincial government’s rescue team, said electricity had been cut in Santa Ana and Gonzaga as a precaution.

On Wednesday, light to moderate rain, occasionally getting heavy, will prevail in Batanes, the northern portion of Cagayan, including Babuyan Islands, and Apayao.

Light to moderate rain, intermittently getting heavy, is expected in Isabela, the rest of Cagayan, northern portion of Aurora, Kalinga and Ilocos Norte.

Estareja said that after making landfall, Ramon was expected to weaken into a tropical storm, and could exit the Philippine area of responsibility as low pressure on Thursday.

As Ramon leaves, however, Sarah is expected to slam into the same parts of northern Luzon toward the weekend.

Estareja said Sarah could intensify into a tropical storm, and also make landfall in Cagayan by Thursday.

It was moving much faster than Ramon at 35 kph, heading northwest. If it maintains its speed, it is expected to leave the country’s area of responsibility by the weekend.