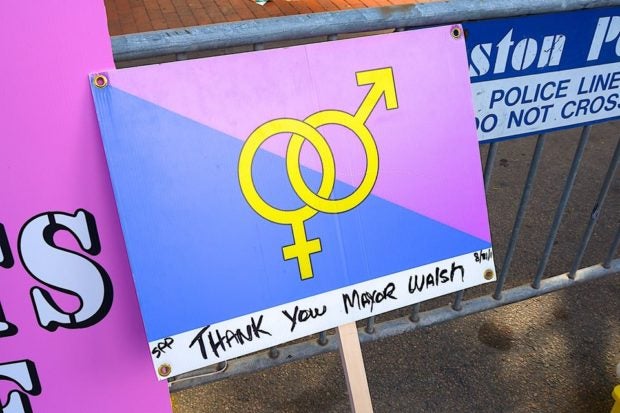 The event had been postponed because the group Protecting Our Next Generation (PONG) could not pay for the city permits to stage it, Dallas Voice reported on Nov. 15. PONG describes itself as composed of “strong conservative Christians.”

After the cancellation was announced, the far-right group Super Happy Fun America (SHFA), which organized a “straight pride” march in Boston earlier this year, said it will still do “some kind of public event” on Saturday, as per its Facebook page.

In the end, two men from Boston came to attended the protest and one more person joined them later. One of them claimed he was fired from his job for being straight, while another said he was part of the “oppressed majority,” Dallas Voice reported on Nov. 16. Organizer Teresa Stephens Richenberger of PONG did not attend.

They were outnumbered by counter-protesters who supported the LGBTQ+ community and anti-fascism. Arguments erupted between both sides, but police broke them up before it could turn violent.

A woman named Princess Vanna reportedly joined the group, but said she had misunderstood the event and was a Christian who did not like “pride.” She said she had come to try converting LGBTQ+ people, activist Soraya Colli tweeted.

Although “straight pride” organizers claim that a “Democrat-controlled” city like Dallas does not respect free speech, the group Transgender Pride of Dallas similarly canceled a parade because of the steep fees. Niña V. Guno  /ra