Palace: Robredo made ‘missteps’ for talking to ‘enemies of the state’ 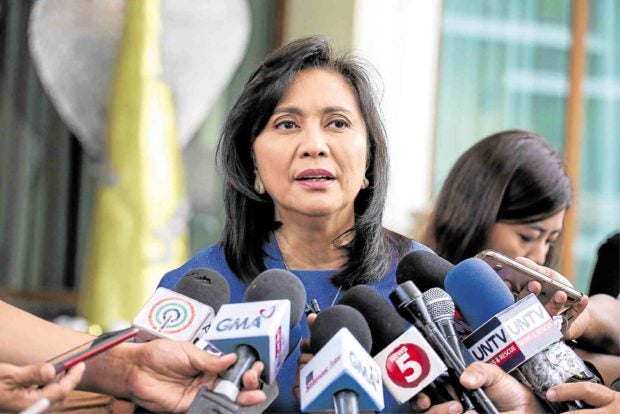 MANILA, Philippines — Vice President Leni Robredo has made “missteps” for talking to “enemies of the state”, prompting President Rodrigo Duterte’s decision not to make her a Cabinet member, Malacañang revealed Tuesday.

Robredo was appointed Duterte’s drug czar on October 31, making her co-chair of the Inter-Agency Committee on Anti-Illegal Drugs (ICAD).

“The Vice President talking with – and seeking the advice of – certain foreign institutions and personalities that have prejudged the campaign against illegal drugs as a violation of human rights, as well as a crime against humanity, did not sit well with the President,” presidential spokesperson Salvador Panelo said in a statement.

After accepting her appointment as ICAD co-chair on November 6, Robredo met with US officials and the United Nations Office on Drugs and Crime (UNODC).

“The VP’s actions are all documented in mainstream and social media. These missteps not only derailed PRRD’s well-meaning intent for the Vice President to be part of the Administration but registered red signs that could not be ignored,” Panelo said.

“Ms. Robredo’s insistence on getting access to classified information, a revelation of which could imperil the welfare of the Filipino people and the security of the State, added to PRRD’s reconsideration of his earlier desire to appoint her in the Cabinet,” Panelo explained.

“Her requests for unrestricted data to help her fulfill her role is an admission that the earlier criticisms of the political opposition to which she belongs against the anti-drug operations have no factual basis,” he added.

Additionally, Panelo said Robredo, “being a member of the Cabinet, “ gives her “unlimited access to sensitive State matters which if transmitted by her whether purposely or otherwise could result to adverse consequences, especially since the VP has the tendency to be generous with acquired information and knowledge to others whose predilection may not be in the best interest of the country.”

In a phone interview with reporters, Panelo said it was “a dangerous sign” that Robredo was talking to “enemies of the state.”

“Since she has talked with certain institutions and people who are supposed to be enemies of the state, to the mind of the President, that is a dangerous sign, that means, you may not be doing it purposely but it’s dangerous that’s why he (Duterte) already made the statement that what you are doing is dangerous,” he said.

“He (Duterte) has reservations,” Panelo said.

Despite this, however, Panelo said Duterte still trust Robredo.

“Yes, there’s still [trust]. [We’re] still waiting for her program, how will she perform her job,” he said.

He then explained Duterte’s “reservations” on Robredo “has nothing to do with trust.”

“It has something to do with the effectivity of your ideas. If you can help me, I will get you,” he noted.