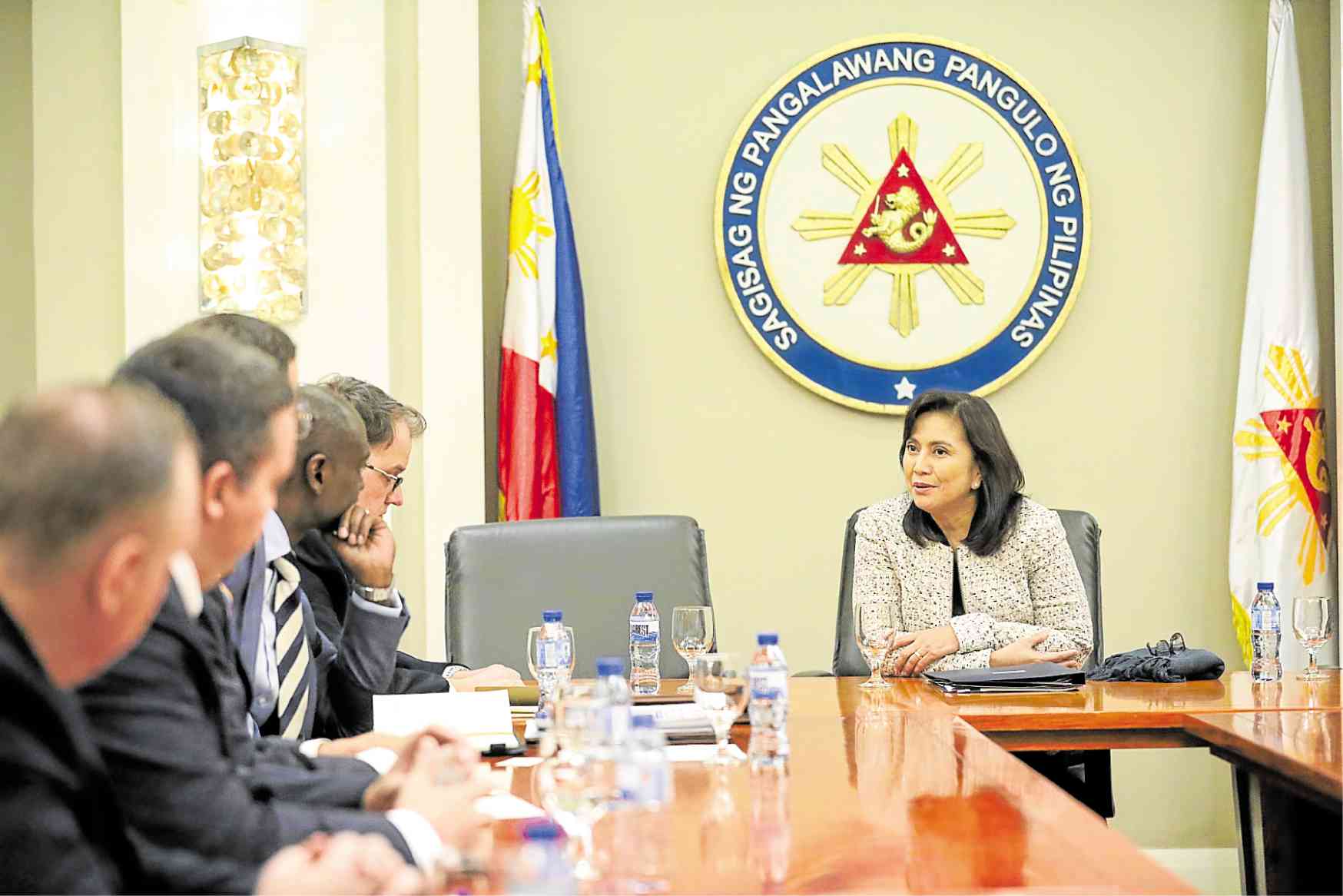 US-PH COOPERATION Vice President Leni Robredo gets a briefing from US officials on their counternarcotics programs in the Philippines on Wednesday. The US officials pledged support and cooperation in the Philippine government’s campaign against illegal drugs. —PHOTO FROM OFFICE OF THE VICE PRESIDENT

MANILA, Philippines — Vice President Leni Robredo on Wednesday met with US officials for a discussion of possible collaboration in the Philippine campaign against illegal drugs.

In a statement issued by her office after the meeting, Robredo said representatives from the US Department of State’s International Narcotics and Law Enforcement Affairs, Drug Enforcement Agency, Federal Bureau of Investigation and US Agency for International Development gave her a “comprehensive briefing” on their counternarcotics programs in the Philippines.

“We talked about the gaps in the current campaign and the assistance that they can give to further strengthen our campaign against illegal drugs,” she said. “This includes the need for clear baseline data on the drug situation in the country.”

They also discussed the possibility of amending the Comprehensive Dangerous Drugs Act, as well as strengthening programs for prevention of drug use and community-based rehabilitation, she said.

“I thanked them for immediately meeting me right after my appointment. They expressed their full support and cooperation in our campaign,” said Robredo, whom President Rodrigo Duterte appointed last week as cochair of the Inter-Agency Committee on Anti-Illegal Drugs, giving her the lead role in his controversial war on drugs.

Robredo has been meeting with representatives of several organizations, including the UN Office of Crime and Drugs, since accepting her appointment.

The Philippine Drug Enforcement Agency (PDEA) welcomed the US cooperation, saying on Wednesday that the Philippines needed all the help it could get to win the war on drugs.

Derrick Arnold Carreon, spokesperson for the PDEA, said the United States and some other countries had been providing the Philippines intelligence that had led to successful law enforcement.

He noted that most successful interdictions at Ninoy Aquino International Airport were due to intelligence shared by the DEA with the PDEA.

Sen. Francis Pangilinan said Robredo’s decision to seek help from the United States and other countries was a step in the right direction.

“All those who want to help and all information that may lead to making the [campaign against narcotics] effective should be entertained,” Pangilinan, president of the opposition Liberal Party.

In accepting her appointment last week, Robredo said she wanted to change the campaign’s approach to the drug menace from fighting a crime to treating it as a public health problem.

She proposed scrapping “Oplan: Tokhang,” the door-to-door police campaign to flush out users for rehabilitation and peddlers for prosecution.

Accompanying the campaign since its launch in 2016 are police operations that have led to the deaths of more than 6,000 mostly poor suspects, whom the Philippine National Police says had resisted arrest.

Rights groups claim, however, that the death toll could be as high as 20,000 because of the almost nightly shootings in the slums at the height of the crackdown, carried out by unidentified men whom they say could be hired guns working for the police or were policemen themselves.

Robredo said she wanted to change the gauge for the effectiveness of the war on drugs from counting bodies to counting “improved lives.”

Malacañang said on Monday that it was open to scrapping Tokhang if Robredo had a better way of dealing with the drug problem, and promised to give her all she needed to help her succeed.

She could make it work

The international group Human Rights Watch said on Wednesday that despite difficulties, Robredo just might be able to make the war on drugs work.

She could score a “win” for the campaign, said Carlos Conde, researcher for the group’s Asia division.

“It seems unlikely that the drug enforcement agency and the police, the drug war enforcers (President) Duterte has promised to protect, would cede any sort of operational control to the Vice President,” Conde said in a statement. “But Robredo may be able to make it work.”

“The Philippines needs to rethink its drug policies and just maybe Robredo is the one who can kickstart that process,” he said.

Despite criticism, Robredo has expressed willingness to take risks, including joining law enforcement.

Among those who said Robredo should join narcs in operations were her cochair of the interagency committee, PDEA chief Aaron Aquino, and junior Sen. Ronald “Bato” dela Rosa, the President’s first PNP chief who launched Tokhang in 2016.

Justice Secretary Menardo Guevarra disagreed, saying the Vice President’s presence would only distract officers, as their first concern would be to protect the country’s No. 2 official.

“[S]he does not have to join an actual raid just to know how it goes,” Guevarra told reporters on Wednesday. “She can monitor in some other way.”

He said Robredo could follow operations through the body cameras worn by officers.

But Barry Gutierrez, spokesperson for Robredo, said the Vice President’s willingness to join law enforcement did not mean she would be on the front line.

“She wants to get a fuller understanding of how operations unfold. She wants to talk to actual law enforcement officials who engage [and risk] their lives in these operations,” Gutierrez told reporters on Wednesday.

“But she will do so in a way that would not compromise the integrity of the situation, that is not distracting and not in a foolish way that she will put herself unnecessarily in the line of fire,” he said.

Read Next
Duterte aide: Let numbers speak for ‘Build, Build, Build’
EDITORS' PICK
New strategies urged to improve public transport
Chaos as thousands return to work in Metro Manila
Cherry Mobile teams up with Cloud Panda PH, launches online store
Leveling up your ‘lutong bahay’ with the kitchen companion you never knew you needed
Senate OKs on 3rd reading bill allowing school opening after August
Someone from the Philippines can become $356 Million richer this Tuesday
MOST READ
‘If I had not been SolGen, I will make you eat your words,’ Calida tells Coco Martin
Chaos as thousands return to work in Metro Manila
51 percent of German firms holding back investments in PH, but not because of COVID-19
Karla Estrada marks 1st anniversary with BF Jam Ignacio: ‘A year worth celebrating’
Don't miss out on the latest news and information.