HONG KONG — Hong Kong’s chief executive said Tuesday that protesters occupying a city-center university had to surrender if the three-day stand-off was to be resolved peacefully.

In her first public comments on the siege at Hong Kong Polytechnic University, Carrie Lam said she believed around 100 people remained at the campus, surrounded by police who were trying to quell the unrest. 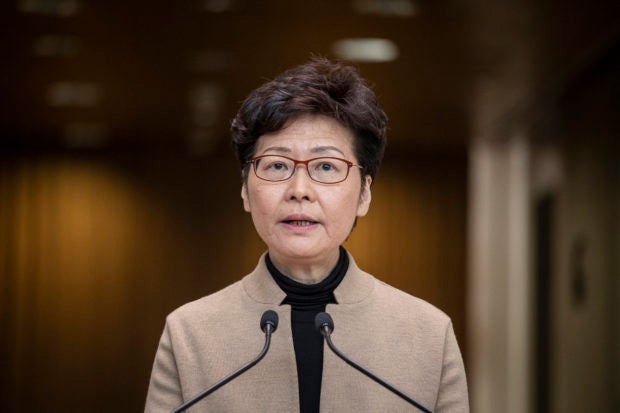 Hong Kong Chief Executive Carrie Lam speaks during a press conference in Hong Kong on November 19, 2019. – Lam said that protesters occupying a city-center university had to surrender if the three-day stand-off was to be resolved peacefully. (Photo by NICOLAS ASFOURI / AFP)

“This objective could only be achieved with the full cooperation of the protesters, including of course the rioters that they have to stop violence, give up the weapons and come out peacefully and take the instructions from the police,” she told a press conference.

Hundreds of mainly young protesters took over the campus at the weekend, holding off police assaults with a barrage of Molotov cocktails, bricks, and arrows, in the most extreme expression of a popular protest movement that is now in its sixth month.

Despite huge police deployments across the territory and almost 4,500 arrests, thousands of protesters continue to take to the streets, sparking warnings from Beijing that it is ready to intervene.

A brief weekend appearance on the streets of People’s Liberation Army soldiers based at Hong Kong garrison — ostensibly to clean up protesters’ debris — fuelled concerns that China is ready to make good on its threats.

A garrison of thousands of PLA troops has long been stationed in Hong Kong.

The city’s Basic Law, the mini-constitution that governs its autonomy, states those troops can be deployed to “maintain public order” at the Hong Kong government’s request.

The central government can also effectively suspend Hong Kong’s Basic Law and take full control if there is a “state of war” or “turmoil” that endangers national security.

On Monday, China’s ambassador to Britain said if the situation “becomes uncontrollable”, the central government would act.

Asked Tuesday under what conditions she would ask the PLA’s garrison in Hong Kong for help, Lam said if the city’s authorities could not competently deal with the “rioters” and escalating violence.

“But right now we are still displaying and demonstrating competence to handle the situation ourselves,” Lam said.