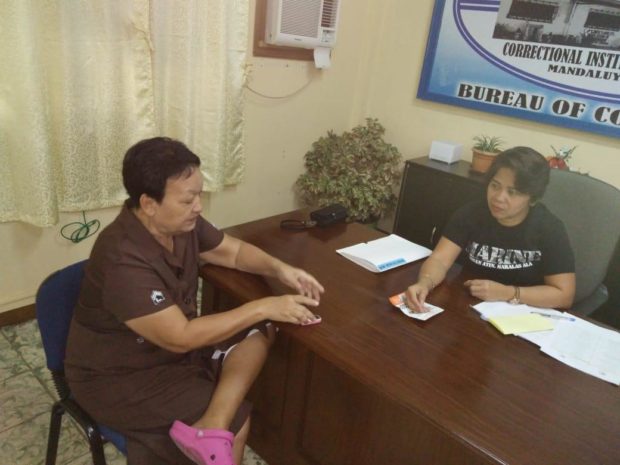 Convicted drug queen Yu Yuk Lai (left) speaks with Angie Bautista, acting superintendent of the Correctional Institution for Women, as she surrenders a cellphone she managed to sneak in for an initial payment of P5,000. (Contributed photo)

MANILA, Philippines — Convicted drug queen Yu Yuk Lai has surrendered her phone to the acting superintendent of the Correctional Institution for Women (CIW), amid the crackdown of the Bureau of Corrections (BuCor) against corrupt personnel.

Yu allegedly managed to buy the gadget for a down payment of P5,000, without a SIM card, from a personnel of CIW. The identity of the alleged corrupt personnel has not been disclosed as of posting time.

Bautista said Yu was also paying P200 per day so she can use the cellphone.

According to Bautista, Yu surrendered the cellphone after the directive of the CIW management for the inmates to yield all contraband in their possession, or have their privileges, including visiting privileges, be scrapped.

She did not confirm when Yu had the phone, but a source said the convicted drug queen had the gadget since the previous leadership of BuCor.

The inmates were ordered to surrender all their contraband until Sunday midnight. The CIW personnel then started to look for other prohibited items in the facility after the grace period lapsed.

Yu was also allegedly paying cash to rent a SIM card from a staff at the CIW.

According to the source, Correctional inmates likewise, surrendered knives, forks, other items that might be used as weapon to hurt fellow inmates, and other contraband.

Yu was convicted in 2001 for delivering three kilograms of “shabu” (crystal meth) in exchange of P2-million worth of casino chips to an undercover policeman on November 7, 1998. She was given a sentence of reclusion perpetua (20 years and one day to 40 years imprisonment) for the drug trafficking charges.