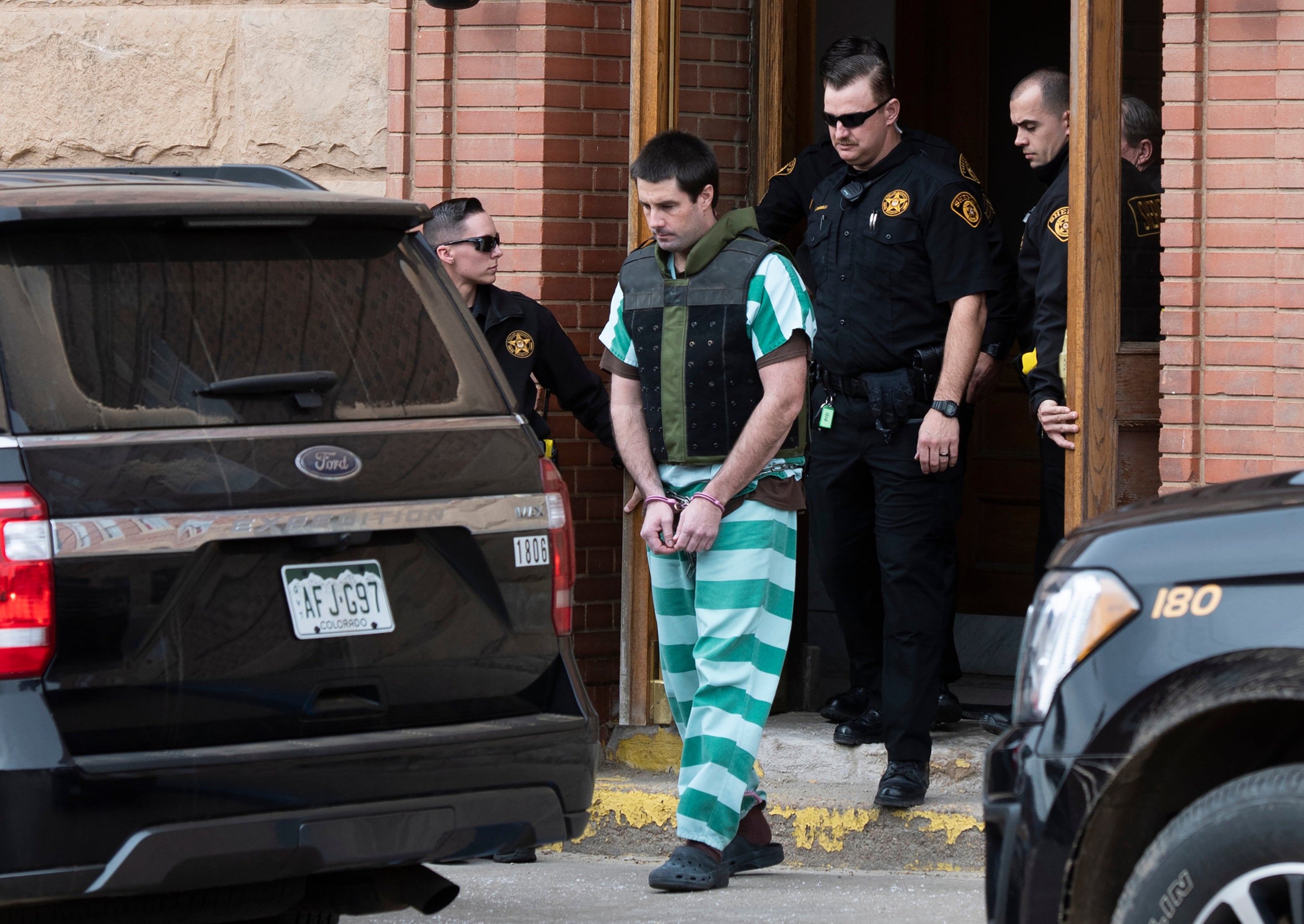 FILE – In this April 5, 2019, file photo, Teller County Sheriff deputies lead Patrick Frazee out of the Teller County Courthouse in Cripple Creek, Colo. The murder trial of a Colorado rancher accused of beating his fiancée to death while their 1-year-old daughter was nearby is coming to an end with jurors expected to hear closing arguments on Friday, Nov. 15, 2019. Then it will be up to the jury to decide whether to convict Patrick Frazee of killing 29-year-old flight instructor Kelsey Berreth and burning her body. (Christian Murdock/The Gazette via AP, File)

CRIPPLE CREEK, Colo. — A jury on Monday convicted a Colorado rancher of beating his fiancée to death while their 1-year-old daughter was in a nearby room, then burning the body and persuading his on-and-off girlfriend to help clean up the blood and cover up the crime.

Patrick Frazee, 33, was convicted of first-degree murder in the death of Kelsey Berreth with a baseball bat in her home. Berreth, a 29-year-old flight instructor, was last seen nearly a year ago on Thanksgiving. Her body hasn’t been found.

Frazee showed no reaction to the verdict, while Berreth’s family sobbed and hugged one another.

With little physical evidence, prosecutors relied heavily on the testimony of Krystal Lee, a former Idaho nurse who has known Frazee for over a decade, and the location of Frazee’s and Berreth’s cellphones in the days after she disappeared.

Lee, who lives in Hansen, Idaho, testified that Frazee asked her to clean up the scene of the killing and that she watched him burn a plastic tote she believed contained Berreth’s body.

Lee acknowledged she took Berreth’s cellphone with her to Idaho at Frazee’s request to try to deceive investigators about Berreth’s whereabouts. She reached a plea deal with prosecutors for tampering with evidence and faces up to three years in prison.

Frazee’s lawyers used the deal to question how honest Lee was about what happened since she initially told authorities she did not know who Berreth was.

Lee said Frazee tried to convince her to kill Berreth several times before he called her last Thanksgiving to tell her that he had a mess at Berreth’s home and he needed her to drive to Colorado to clean it up.

According to her account, Frazee covered Berreth’s eyes with a sweater and asked her to smell some candles before he started beating her while the couple’s 1-year-old daughter was in a storage room. Lee testified that Frazee said Berreth’s last words were “Please stop.”

A partial human tooth was found at the site on Frazee’s property where Lee says the bag was burned, but it did not have enough DNA to determine whom it belonged to. An expert testified that the burned plastic residue found next to a spot of oily dirt was consistent with a body being burned but acknowledged that motor oil could have left a similar stain.

Frazee’s lawyer, Adam Steigerwald, said no DNA evidence tied to Lee was found at Berreth’s home. Colorado Bureau of Investigation analyst Caitlin Rogers said that did not surprise her because the bleach that Lee said she used to clean up destroys DNA.

Lee showed investigators some small blood spots she said she purposefully left behind. Blood stains were also found between the slats of the home’s wood floor.

On the final day of testimony, jail inmate Jacob Bentley told the jury that Frazee asked him to kill Lee, Lee’s relatives and the case’s lead investigator while the two of them were housed near each other in jail.

Prosecutors have not given a motive for the slaying. Berreth’s parents argue in a wrongful-death lawsuit that they believe Frazee wanted full custody of the couple’s daughter, who now lives with them.

Berreth was last seen at a supermarket on Thanksgiving 2018, shopping with her daughter. Between then and Nov. 25, texts were sent between Berreth’s and Frazee’s phones about exchanging their daughter and Berreth purportedly wanting to break up.

The phones were in the same location when those texts were sent, prosecutors said. After Nov. 25, Berreth’s phone started sending signals from Idaho.

Lee testified that she sent the last message from Berreth’s phone to Frazee — “Do you even love me?” — after returning to Idaho.

Witnesses testified that Frazee accused Berreth of abusing their daughter. Investigators said there was no evidence of any abuse by Berreth.

A man who said he considered Frazee to be like a stepson, Joseph Moore, testified that when he asked Frazee how Berreth was doing in April 2018, he told him that he had figured out a way to kill her and get away with it.

Moore said Frazee said, “No body, no crime,” a phrase he said Frazee would repeat to him several times over the summer and fall that year.

“He’s like, ‘Man, if I had known it was going to blow up this big, I never would have …’ And he stopped. He did not finish that sentence,” Moore testified.