HONG KONG — Hong Kong police are calling on protesters barricaded inside the city’s Polytechnic University to surrender and face justice, saying they have no other option given the level of violence in recent days.

The regional commander of Kowloon West district, Cheuk Hau-yip, told reporters at a daily briefing on Monday: “These rioters, they are also criminals. They have to face the consequences of their acts.”

Cheuk added: “Other than coming out to surrender, I don’t see, at the moment, there’s any viable option for them.”

He said police have the ability and resolve to end the standoff peacefully so protesters should not “try their luck.” 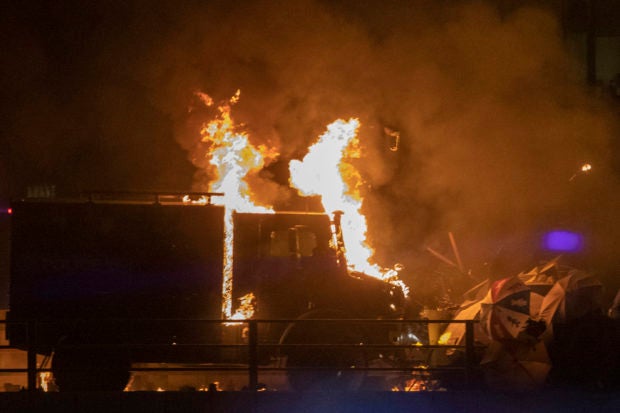 In this Sunday, Nov. 17, 2019, photo, an armored police truck tries to breach a barricade outside the Hong Kong Polytechnic University in Hong Kong. Fiery explosions were seen early Monday as Hong Kong police stormed into the university held by protesters after an all-night standoff. (AP Photo/Ng Han Guan)

China’s government, meanwhile, said it supports efforts by Hong Kong police to protect the livelihoods and safety of citizens after a weekend of clashes.

Chinese foreign ministry spokesman Geng Shuang said Monday that the protests, now in their sixth month, “are no longer a simple, peaceful demonstration.”

“It is a handful of criminals exacting violence against regular civilians,” Geng said. “They have affected social order.”

Geng said Pompeo has carried a “worn-out script” with him everywhere in a bid to smear China.

As this developed, the head editor of China’s nationalistic Global Times newspaper said Hong Kong police should use snipers to fire live ammunition at violent protesters.

Hu wrote on his Weibo social media account: “If the rioters are killed, the police should not have to bear legal responsibility.”

Hu is an outspoken commentator who leads the Global Times, a tabloid under the People’s Daily, the official paper of the ruling Communist Party. He made similar remarks on Twitter, which is banned in mainland China.