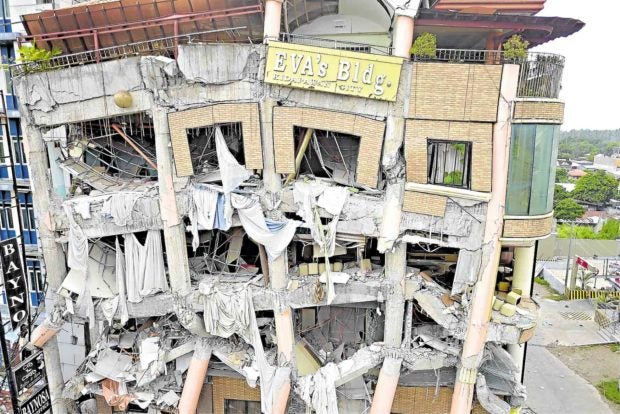 CONDEMNED Eva’s Building, a landmark in Kidapawan City, has been condemned due to the extensive damage it sustained from the earthquake that rocked Cotabato province last month.

DAVAO CITY—Earthquakes can’t kill but buildings and structures do.

Science and Technology Undersecretary Renato Solidum Jr., also officer in charge of the Philippine Institute of Volcanology and Seismology (Phivolcs), made this clear in a Davao City forum months before the series of earthquakes jolted Cotabato province and most of Mindanao in late October.

That poorly built structures cause death and damage is also among the lessons that experts from the Phivolcs and Association of Structural Engineers of the Philippines (Asep) want the public to learn from the series of earthquakes that rocked Cotabato province and wrought damage to a wide area of Mindanao recently.

Geologist Jeffrey Perez, Phivolcs supervising science research specialist, said if the National Building Code of the Philippines (NBCP) had been strictly followed, no structure was supposed to collapse in an earthquake of below 8 magnitude.

Perez said that most of the areas where tension cracks appeared and which had been hit by quake-triggered landslides had already been identified in geohazard maps generated by the Phivolcs and the Mines and Geosciences Bureau long before the earthquakes struck this year. This meant that if the geohazard maps had been strictly observed in the construction of houses and the development of communities, the government could have minimized the number of casualties during calamities, like earthquakes, he said.

Among the first casualties of the Oct. 16 quake were infants and children hit by debris from hollow blocks from the crumbling walls of their own houses at the height of the 6.3-magnitude quake, indicating the need for the NBCP and the National Structural Code of the Philippines (NSCP) to be followed at the grassroots level, experts said.

But the two strong earthquakes that followed the Oct. 16 temblor also caused extensive damage to buildings and other structures, prompting experts to ask whether the law on building construction had strictly been followed.

But he said the extent of the violations was evident even at first glance at the badly damaged structure of Ecoland 4000 in Davao City and Eva’s Hotel in Kidapawan City, both of which sustained severe damage at the height of the 6.5-magnitude quake on Oct. 31, the third of the series of strong earthquakes that shook Cotabato province.

“If we base our discussion on the prevailing laws, the NSCP’s minimum requirement is to secure the structure for life safety and collapse prevention,” he told the Inquirer by phone. “These should not collapse within 7.2-[magnitude quake],” he said.

“Buildings may suffer damage but not to the point of collapse,” said Cunanan, one of the Asep engineers asked to audit the integrity of structures in Kidapawan City and other areas.

Cunanan said he and a team of structural engineers did not go near the six-story Eva’s Hotel in Kidapawan, a city landmark whose ground floor collapsed during the quake. But by just looking at it, he said it was apparent that the building was not following the minimum requirements in the NBCP.

“We did not go near the building because it was too dangerous but from one look … there was a degree of noncompliance,” he said.

He said posts on the ground floor of Ecoland 4000 were too small to counter the ground shaking. “From the outside, we can see the visible causes of failure,” Cunanan said. He said he was not among the engineers tasked to audit Ecoland but he went there to see what caused its collapse.

On the first days following the quake, economic activities almost ground to a halt in Digos City, the capital of Davao del Sur province, and Kidapawan City, the provincial capital of Cotabato, as most of the newly constructed shopping malls had been shut down by their respective local governments as cracks appeared on the buildings. 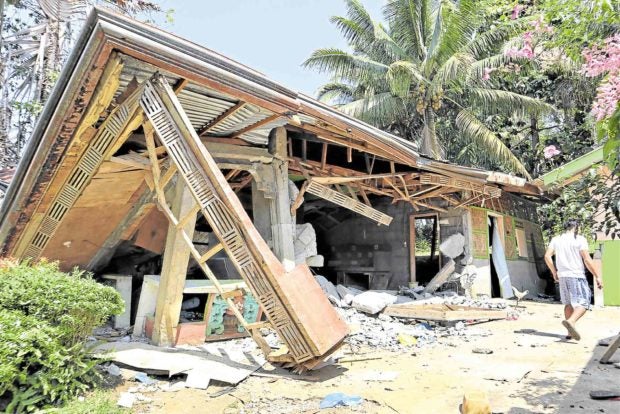 HOUSE CHECK A resident of Makilala town in Cotabato provice returns to his village to check on his house destroyed by the earthquake. —ERWIN MASCARIÑAS

Mayor Arthur Davin of the badly hit Davao del Sur town of Magsaysay said the attention of the local government had been called regarding the implementation of the NBCP at the grassroots level, but he said poverty was factor in noncompliance.

“Supposedly in the Building Code, people should get a government permit first before building any kind of structure, including a fence, so that engineers could check if they were using the right materials and the right design,” Davin said. “But because of poverty, they try to save money and build only a portion of the house at a time. It’s only after they have finished the entire house that they come here (town hall) to get approval of their ‘as built plan,’ so engineers could no longer check what kind of materials they used,” the mayor said.

He said the result of this “negligence” on the part of the homeowner could result in loss of lives and property during an earthquake.

“Because they’re saving on the cost of materials and [labor], this has taken a toll on their lives,” Davin said. “This is a lesson to be learned … what you have invested for years is gone in one sweep.”