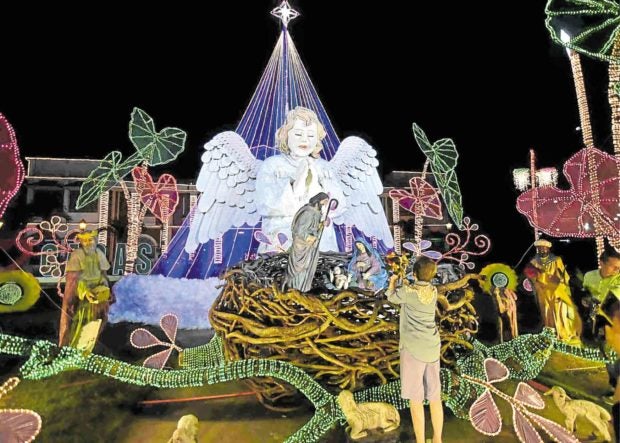 CAPAS, TARLAC—The Holy Family remains the focus of this year’s Belenismo, an annual display of colorful dioramas depicting the biblical tale of the birth of Jesus Christ in a stable after his parents, Joseph and Mary, were turned away by an innkeeper.

But one of the 47 Nativity dioramas put up along the road for the 12th staging of this tourist-drawing event was inspired by the 30th Southeast Asian (SEA) Games, which the country is hosting later this month.

The nest evokes the birth of renewed hope and is made of “gugu” vines which were gathered by the Aeta living at Sitio Tarucan in Barangay Sta. Juliana, he said.

Used tires were painted and arranged to form the SEA Games logo, featuring 11 intertwined rings shaped like the Philippines to represent the countries participating in the Games. The rings were placed at the side of the belen.

But people’s attentions were focused on the animatronic giant angel, made of old X-ray films discarded by Ospital ning Capas. Cattle bones were used to form the angel’s wings.

This is the 12th Belenismo, which is organized each year by the Tarlac Heritage Foundation led by its cofounder, Dr. Isa Cojuangco Suntay.

Churches, local governments and agencies, and companies take part in the event, which draw people to colorful belen lining the 67-kilometer stretch of MacArthur Highway (Manila North Road) from Bamban town to San Manuel town and 39 km of Romulo Highway traversing Tarlac City and the towns of Camiling and San Clemente.

In Capas’ Barangay Talaga, a 15.24-m (50 ft) tall replica of the Eiffel Tower looms large. It was also designed by Dizon, who was commissioned by the community of Kastelo Verde, which joined Belenismo for the first time. The images of Joseph, Mary and the Baby Jesus are at the bamboo center of the tower.

At Camp Servillano Aquino in Tarlac City, soldiers of the Armed Forces Northern Luzon Command put together a crown that served as a canopy around the belen. Beneath the crown, however, was a crown of thorns, to show Jesus Christ’s eventual sacrifice for humanity as depicted in the Bible.

Belenismo organizers encourage the use of recycled materials so the crown’s jewels and gems were recycled from the Army’s 2018 belen by 13 soldiers who volunteered to do the task.

The belen put up by San Lorenzo Ruiz Parish in Tarlac City’s Fairlane Subdivision is made of 300 “bikal” bamboo poles. “A bikal bamboo alone is weak, but together, these bamboo poles are stronger, and that kind of strong unity is what the parish is trying to advocate,” said parish priest Noel Paguinto.

The belen walls were decorated with artificial plants and flowers made of discarded plastic bottles.

The wings of a large butterfly made of bottle caps, colorful straws and disposable plates cover San Manuel town’s belen. An ear of corn in the middle of the belen represents the town’s main crop. The Holy Family and the Three Kings wore garments made of neatly arranged plastic spoons and forks. The word, “Peace,” was placed at the background.

Bamban town’s belen is surrounded by replicas of its heritage structures like Bamban Bridge and Sto. Niño Parish Church. The bridge arches above the images of the Holy Family and is flanked by the abaca mat replica of the town hall and church. The bridge is composed of plastic materials used to build “parol” (lanterns).—MARIA ADELAIDA CALAYAG

Read Next
EMB stops Batangas land dev’t
EDITORS' PICK
Smart 5G goes live
Water remains our saving grace right now
PNP: Checkpoints back in MECQ areas
Been there, done that but what’s the difference between MECQ and GCQ?
BREAKING: 3,226 latest COVID-19 cases bring PH’s total to 106,330
A gem of a residence in the new normal
MOST READ
MECQ guidelines in infographics
Doctors group to Duterte: ‘There was never a call for a revolt’
MECQ in NCR, other areas: Mass transportation suspended, quarantine pass required anew
Duterte heeds frontliners’ plea, reimposes MECQ in Metro Manila, other areas Aug. 4 -18
Don't miss out on the latest news and information.