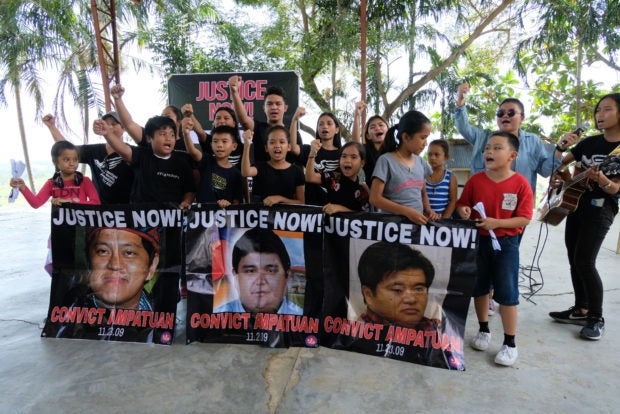 Children of the media victims in the infamous Ampatuan massacre 10 years ago continue to cry for justice as they visit the massacre site in Sitio Masalay, Barangay Salman in Ampatuan town, Maguindanao on Sunday, Nov. 17, 2019. PHOTO BY BONG S. SARMIENTO

AMPATUAN, MAGUINDANAO– The families of the media victims of the infamous Ampatuan massacre gathered here on Sunday to demand anew justice for their loved ones.

The victims’ families lamented the lack of justice six days before the 10th anniversary of the gory massacre that claimed the lives of 58 people, including 32 media workers, on November 23, 2009.

“Justice, why are you so elusive.? We have been waiting already for 10 tortuous years, ” She said in Filipino.

The victims’ children performed a touching theater performance that elicited tears from a crowd of more than a hundred other family members.

The massacre’s principal suspects include former Maguindanao governor Andal Ampatuan, Sr., who died from an illness while in custody, and his sons Zaldy, former governor of the Autonomous Region in Muslim Mindanao, Andal Jr., former mayor of Datu Unsay town, and Sajid, former Maguindanao vice governor.

Zaldy and Andal, Jr. have been jailed in Taguig City while the case is being heard, while Sajid was freed on bail.

The media victims’ children burned tarpaulins with the photographs of the Ampatuan brothers.

Nonoy Espina, chair of the National Union of Journalists of the Philippines, said they are expecting a guilty conviction particularly for the principal suspects.

“We should not stop fighting for justice even with a guilty decision. It will still be a long battle, ” he said, referring to the right of citizens to appeal a court decision.

Espina said that of the 197 suspects, 80 remained at large.

A mass was offered for the victims during Sunday’s visit.