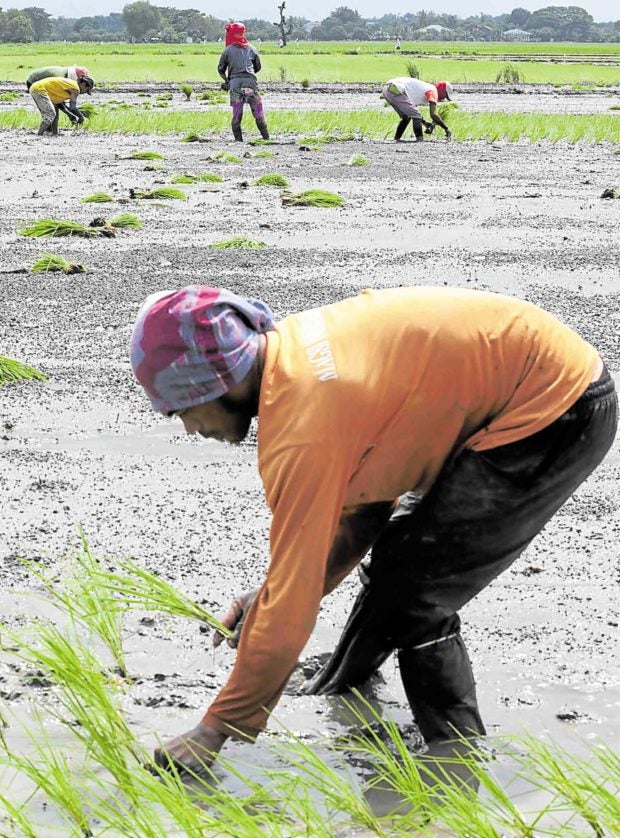 At 63, sugar worker Cesar Lenijan and his wife, Fe, still work the fields of Negros Occidental, hauling sugarcane and earning just P10,000 for an entire season of backbreaking labor.

The meager pay and a subsequent heart attack that sidelined Lenijan from full time work finally pushed his sons out of an industry now tottering on its last leg.

Lenijan’s eldest is currently an office worker in Manila, while his youngest will join a fast food crew next month.

The two are part of the exodus of local food producers from the fields to the cities, a worrying trend that has afflicted the country’s agriculture sector, the National Economic and Development Authority (Neda) said on Friday, citing its report, “Rural Labor Migration: An Analysis of the Loss of the Labor in the Agriculture Sector in the Philippines.

The report magnified a bitter truth that has been gnawing at the agricultural sector for almost a decade: 15 out of 17 regions in the country reported losses in agricultural employment between 2010 and 2017.

Notable decreases were seen in the regions of Ilocos, Central Luzon and Calabarzon, where the count of farmers and farm laborers dipped by 6 percent, 5.80 percent and 5.59 percent, respectively.

Only the Eastern Visayas region was able to increase its agricultural workforce by 4.73 percent, while the rest of the country, excluding the National Capital Region, being nonagricultural, recorded a decline between 1.30 percent and 6 percent.

Neda noted that while not all these jobs necessarily pay higher wages, they offer a relatively stable income stream, nonwage benefits and better working conditions—all of which are elusive in the agriculture industry.

At P280.37 a day, the current daily average pay for agricultural workers is only half the minimum daily wage of Metro Manila employees.

“We cannot stop these agricultural farmers and workers from leaving just because we want to keep production up,” Sugar Regulatory Administration chief Hermenegildo Serafica said. “It is their right to find better opportunities for themselves and improve their quality of life.”

Early this year, Socioeconomic Planning Secretary Ernesto Pernia described the agricultural sector as the economy’s “weakest link,” with an anemic growth rate of 1.1 percent over the last decade.

For the first nine months of the year, it grew by only 0.75 percent, while its value fell by 3.35 percent from last year.

A bountiful harvest can easily be wiped out by drought from El Niño, while floods from La Niña can just as ruthlessly drown seeds and fertilizer in the fields. Former Agriculture Secretary Emmanuel Piñol noted that last year, some P36 billion worth of crops were lost after a supertyphoon and 12 tropical storms battered the country.

But more than just forces of nature, the report identified “key internal push factors” that have slashed productivity and made life difficult for farmers and food producers.

They include rising production input costs (particularly labor), low farm-gate prices, limited access to credit and output markets, poor management of irrigation systems and the widespread conversion of farmlands to commercial use.

Farmer leaders from Unyon ng mga Manggagawa sa Agrikultura, Kilusang Magbubukid ng Pilpinas and the Samahang Industriya ng Agrikultura cited the lack of policy direction from the government as a disincentive for them. Programs that are sloppily crafted are abandoned midway, new farm equipment are left rotting in warehouses and seeds go to waste because they’re unsuitable to the soil.

Neda concedes as much. Better coordination among government agencies could boost farm productivity, it said in a statement, adding that Neda was looking as well into developing high-value byproducts of traditional crops, increased investment in storage and logistics, the incorporation of agriculture into primary and secondary curriculum as a way to engage the youth, and the development of investment instruments, such as bank loans, bonds, and stocks.

For Bruce Tolentino, former director of the International Rice Research Institute, the government must find ways to pull agriculture wages to the same level enjoyed by other sectors if it wants to encourage more people to stay in farming.

“A long list and lots of bottlenecks must also be resolved … There are no magic bullets, and the results will need at least five to 10 years to emerge,” he said.