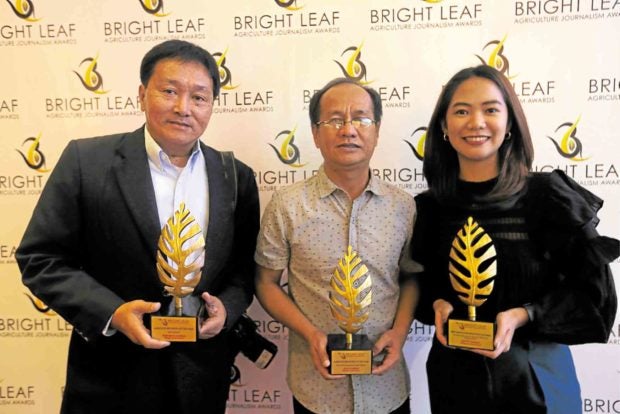 This year’s awardees, Gorkun said, focused on agricultural practices and innovations in the face of adversity in the increasingly challenged sector.

The Best Agricultural Story of the Year—“Farm tourism grows in Leyte Village,” by Inquirer correspondent Joey Gabieta—was about farmers of Villaconzoilo village who endeavored to turn their third-class municipality into a thriving tourist farm.

Bright Leaf cited Gabieta’s March 10 piece for shedding light on how the villagers were “able to recover from poverty and violence by consciously cultivating a growing interest in farming and tourism in the region.”

Gabieta’s story prevailed over the other winning entries in the competition’s 12 categories.

Veteran photojournalist Willie Lomibao won the Agricultural Photo of the Year for his photograph “Salt Harvest,” taken in Pangasinan province and published on June 21.

He was cited for “highlight(ing) traditional Philippine agricultural practices by showcasing its beauty, as well as the clarity of the photographer’s vision.”

While agricultural issues may often seem “invisible,” Yuson said, the prestige of winning the Bright Leaf Award “is proof that your works are being read, and it is influencing the way policies are made and viewers and listeners think about agricultural concerns.”

“Your stories highlight the importance of scientific thinking and research, showcase the resilience and survival instincts of the men and women who perform the work necessary to keep the industry alive,” Yuson said.

Apart from a cash prize, a new iPad and an all-expense paid trip to an Asian country, the awardees also receive a leaf-shaped trophy designed by artist Jodinand Aguillon and inspired by the Bulakeños’ paper-cutting craft called “pabalot.”