‘Overstrong’ steel bars seen as cause of supermart collapse 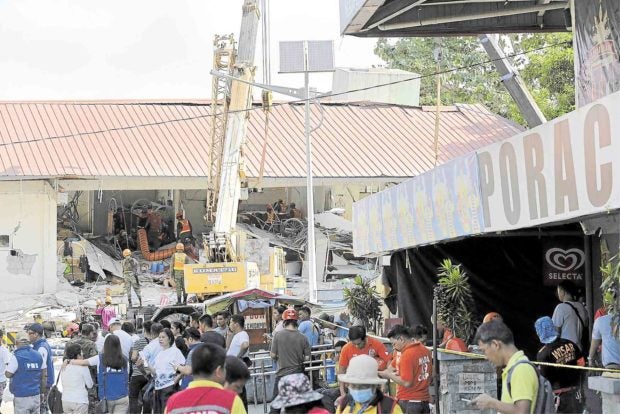 PORAC, PAMPANGA—The use of “overstrong” reinforcing steel bars (rebars) caused the Chuzon Supermarket here to collapse during a 6.1-magnitude earthquake in Luzon on April 22, according to an engineer whose views were sought by the Inquirer.

Independent structural and forensic engineer Emilio Morales analyzed the results of tests done by the Bureau of Research and Standards (BRS) of the Department of Public Works and Highways (DPWH) on 34 rebar samples taken from the ill-fated four-story building in Barangay Cangatba here.

His comments differed from the finding of the DPWH Special Task Force (STF) in its May 28 report, obtained in October through President Duterte’s Executive Order No. 2 on freedom of information.

According to Morales, the STF made a “very critical inadvertence or lapse when it failed to analyze and understand the implications of the overly high rebar strength test results.”

The STF stated thrice in its report that the rebars “conformed with the minimum requirements of ASTM A615 Grade 40 based on the physical (tension and bending) and chemical test conducted by the BRS.”

The building, constructed in 2013, collapsed in the April 22 quake. A mother, her two young children and two other women were killed, and nine employees of the supermarket were injured.

Unlike the results of the concrete strength tests that were stated and explained in the main report, the rebar test results were buried in annexes and went without explanations.

Morales said an analysis of the results would have alerted private structural engineering advisers that the “concrete was bound to fail ahead of the rebars and cause catastrophic failure.”

The samples, which were deformed rebars ranging from 10, 16, 20 and 26 millimeters in diameter, were taken from beams, columns and other parts of all floors except the ground floor.

Plotting the test results against threshold values, Morales said the private engineering advisers “completely missed out” the fact that in structural design, there are maximum limits set in the National Structural Code of the Philippines 2015 that should not be exceeded by the materials.

“If the rebar is stronger than intended in the design, the concrete will fail suddenly without warning because concrete is a brittle material,” Morales explained.

The DPWH report also “totally missed” the provisions needed to meet the requirements in the ACI318, which served as a reference in the code.

“The code sets the limit and most of the results on the Chuzon rebars tests greatly exceeded the limits,” he pointed out.

“The rebar test results were not given equal attention as the concrete strength since a careful study would have indicated that it is significantly contributory to the initiation of failure in the building,” Morales also said.

He added further: “This now brings us to critical question as to what rebar grade was sold to the building owner or contractor, contrary to what was used in the design.”

The STF did not name the makers and grades of the rebars.

Quenched tempered bars have proliferated in the Philippine market since two decades ago, in contrast to their being banned in other countries. These replaced the much costly MA bars.