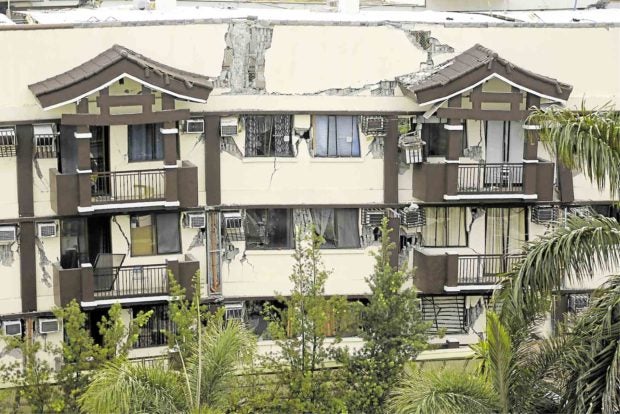 DIGOS CITY—The series of earthquakes that rocked Central Mindanao last October has prompted school authorities here to plan accordingly for the resumption of classes on Monday.

According to Gil Gubat, executive officer of the City Disaster Risk Reduction and Management Council, classrooms have been inspected in order to determine which among these rooms should be off limits or need repairs.

Digos City Mayor Josef Cagas had extended for another week his suspension of classes to give time for a cleanup of debris in schools.

Many parents have urged school authorities to conduct classes on the ground floor of the school buildings, so it would be easier for children to escape to safe areas when another earthquake strikes.

At Digos City Central School, which has some 6,000 students, classes that cannot be accommodated in the ground floor may be held at the school gym.

At Davao del Sur National High School, which has 11,000 students, parents have agreed to contribute P50 for the setting up of temporary learning shelters instead of having classes held in the upper floors. Only 80 of 184 classrooms in this school were deemed safe.

Beyond the campuses, many establishments were still closed as of Friday due to ongoing repairs while four of the bigger ones, which employ thousands, remain closed.

At least 3,000 workers have been out of work in this capital of Davao del Sur due to the closure of malls and department stores.

In Davao City, the local government here is looking into charges that may be filed against developers of a collapsed residential building and another property that has been declared unfit for occupancy.

“We will explore possible legal actions if we will see that there is neglect,” Davao City Mayor Sara Duterte said in a statement, regarding the collapsed Himeji Building of Ecoland 4000 Residences and Palmetto Place Davao, which the city government has declared condemned.

The five-story Himeji Building collapsed due to the 6.5-magnitude quake on Oct. 31. At least nine, including a Korean national, were hurt after the ground floor of the said building caved in. The building already sustained cracks from the 6.6-magnitude temblor two days earlier.

According to Duterte, occupants of Palmetto Place “have voluntarily vacated their units after receipt of a ‘notice to vacate’ from the Davao City Office of the Building Official.”