Davao Archbishop Valles recently called on the faithful to pray for Leni Robredo as she takes on her new role as the country’s anti-drug czar.

But Locsin blasted the CBCP president, disparaging Valles as an “ecclesiastical idiot” and should acknowledge President Rodrigo Duterte. 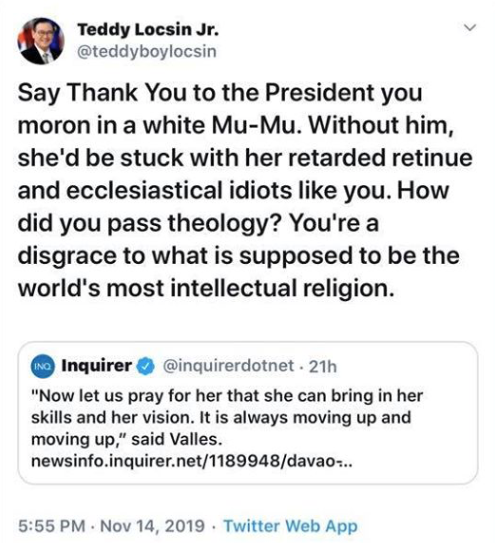 “Say Thank You to the President you moron in a white Mu-Mu. Without him she’d be stuck with her retarded retinue and [ecclesiastical] idiots like you,” Locsin said in an already deleted tweet on Thursday.

“How did you pass Theology? You’re a disgrace to what is supposed to be the world’s most intellectual religion,” Locsin said.

Caloocan Bishop Pablo Virgilio David responded to Locsin through a Facebook post on Friday, saying Valles was a professor of Theology in several schools before becoming bishop of Zamboanga.

“I can only wonder what it was in what the archbishop had said in his request for prayers for VP Leni that deserved such vitriolic and patently undiplomatic remarks from our country’s top diplomat?” David said. 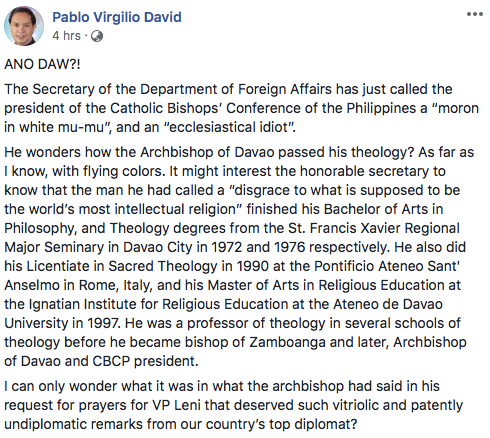