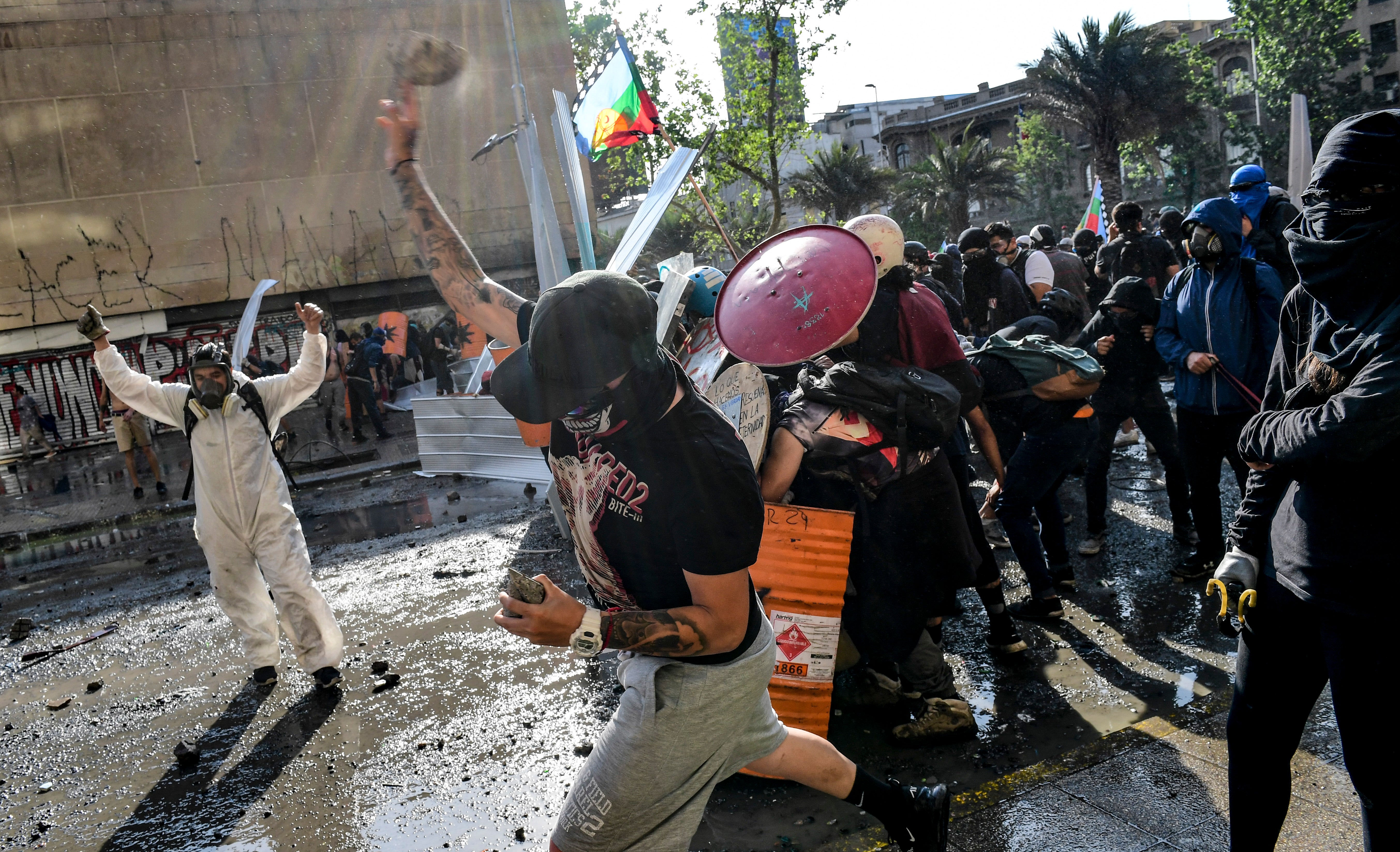 Demonstrators clash with riot police during a protest against the government and to commemorate the first anniversary of the death of Mapuche indigenous leader Camilo Castrillanca -killed in a police operation- in Santiago, on November 14, 2019 – The demonstrators are demanding greater social reform from President Sebastian Pinera, who has announced several measures in a bid to appease protesters, including a pledge to change the constitution that dates from the 1973-90 Augusto Pinochet dictatorship. (Photo by Martin BERNETTI / AFP)

SANTIAGO, Chile — Running away as shots rang out, Carlos Vivanco turned to see where they were coming from. Then he felt his left eye closing and his face dripping with blood.

The 18-year-old student had become one of scores of people hit in the eyes, and in some cases blinded, by police rubber bullets in Chile’s recent wave of anti-government protests.

Police have fired tear gas, water cannons and rubber shot cartridges. Vivanco was hurt during the first week of the protests, when President Sebastian Pinera sent soldiers onto the streets.

“They wanted to cause me pain, shame, regret, fear,” says Vivanco at his house in the suburb of La Pintana near the capital Santiago.

“But they had the opposite effect. I have more rage than pain and more hatred than shame — and it is against those who are out there shooting and mutilating people.”

Vivanco went out to demonstrate in his neighborhood three weeks ago, in the first violent days of the unrest.

He says he joined the demonstrations against austere economic policies and the high cost of living because he wanted to protest for greater social equality.

He was running to avoid the police when eight shot pellets hit his body.

One of them hit his left eye. Another lodged in his face — close to his right eye, very nearly blinding him in that one too.

“It was clear what they were capable of, but I didn’t think they were allowed to fire like that, like butchers,” he says.

Now, along with his dark baseball cap and the ring in his ear, he wears a black eye patch.

Builder Cesar Callozo, 35, was hit in the eye while playing a drum along with fellow musicians in the Plaza Italia, in central Santiago.

“There was a very nice atmosphere. All at once I felt something hit my eye and I fell to the ground,” he says, on the verge of tears as he waits for a checkup on his right eye at the Salvador Hospital in Santiago.

“It hurt. I writhed on the ground a bit. Then the pain receded and my face went numb. I stood up and yelled out that they wouldn’t defeat me.”

In the same waiting room, Nelson Iturriaga, 43, is also waiting to see doctors who he hopes will help him recover the sight in one injured eye.

“They tried to put out the flames by pouring petrol on them,” he says. “And the people are still in the street, calling for dignity.”

Mauricio Lopez, an eye trauma doctor at the hospital, says the blindings are like “an epidemic.”

“I have been working as an eye doctor for 20 years and I don’t think anything like this has ever happened in the history of Chile.”

Human rights groups and the Chile Medical College believe more people have suffered eye injuries during the protests in Chile than in the “yellow vest” riots in France or the recent protests in Hong Kong.

Unrest that began on October 18 with demonstrations against a rise in transport tickets descended into burning, looting and daily clashes between protesters and police.

Prosecutors say 20 people have died, including five at the hands of security forces, and thousands injured.

It said the injuries were caused “especially by pellet-shot guns but also with other weapons such as tear gas canisters.”

Lopez said he knew of 35 cases of deep eye injuries that were likely to cause total blindness.

The government has defended the military police against complaints by the Inter-American Commission on Human Rights, but has promised to “restrict” the use of rubber bullets.

Pinera has announced a series of reforms, but protesters continue to mobilize, calling for him to quit.

Vivanco remains committed to protesting for a more just country. He proudly shows off a tattoo on his knuckles reading “Liberty.”