BERLIN – The European Investment Bank said Thursday that it will stop financing fossil fuel energy projects from the end of 2021 as part of an effort to fight climate change. 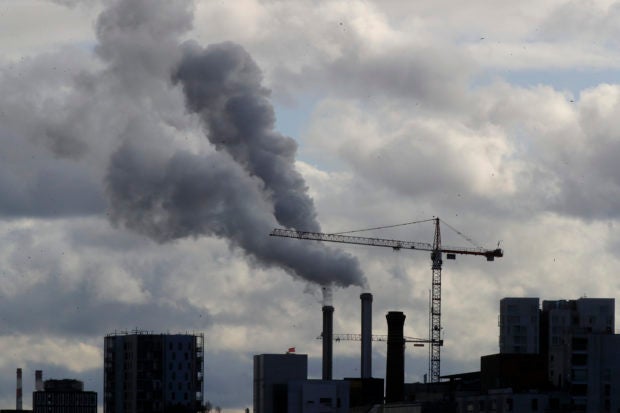 Smoke billows from a plant just outside the French capital, Wednesday, Nov. 13, 2019 in Paris. The world’s thirst for oil will continue to grow until the 2030s, with climate-damaging emissions climbing until at least 2040 — and consumers’ insatiable appetite for SUVs is a big reason why. (AP Photo/Michel Euler)

“We will stop financing fossil fuels and we will launch the most ambitious climate investment strategy of any public financial institution anywhere,” the EIB’s president, Werner Hoyer, said in a statement.

Calling climate “the top issue on the political agenda of our time,” Hoyer noted scientists’ warnings that the planet is heading for a 3-4 degrees Celsius (5.4-7.2 Fahrenheit) increase in global average temperature by the end of the century.

“If that happens, large portions of our planet will become uninhabitable, with disastrous consequences for people around the world,” he said.

The 2015 Paris climate accord aims to cap global warming at no more than 2 degrees Celsius (3.6 Fahrenheit) by 2100 compared with pre-industrial times.

The policy change —which will also see the EIB prioritize lending for energy efficiency, low carbon technology and grid improvements — comes as the EU tries to ratchet up its climate efforts.

Earlier Thursday, Germany’s Foreign Minister Heiko Maas told diplomats and scientists in Berlin that “Europe must lead, because only then other countries such as China or India will stay the course too.”

He backed a proposal by the incoming European Commission for the 28-nation bloc to agree a Green New Deal that would see economic programs linked with efforts to reduce carbon emissions.

German Environment Minister Svenja Schulze said the EU should aim to reduce greenhouse gas emissions by up to 55% by 2030 compared with 1990 levels, in line with Germany’s national target. The current EU goal is for a 40% cut.

Despite its tough talk, Germany was one of the countries which had resisted a complete end to fossil fuel funding by the EIB. Conservatives in the German government wanted an exemption for natural gas infrastructure on the grounds that it can help wean countries off more polluting coal.

Environmental groups cautiously welcomed the EIB decision but warned that it contains some loopholes for some gas projects.

Separately, Sweden’s central bank said Wednesday that it has ditched bonds issued by the Canadian province of Albert and the Australian states of Queensland and Western Australia because authorities there are not doing enough to reduce carbon dioxide emissions.

On Thursday, the European Commission announced that vehicle tires will have to come with clearer energy labels from 2021, to help consumers choose those that are most efficient.

The EU executive estimates that high rolling friction can increase fuel consumption by up to 30%, and more efficient tires could have the same effect as 4 million fewer cars on the roads. /gsg