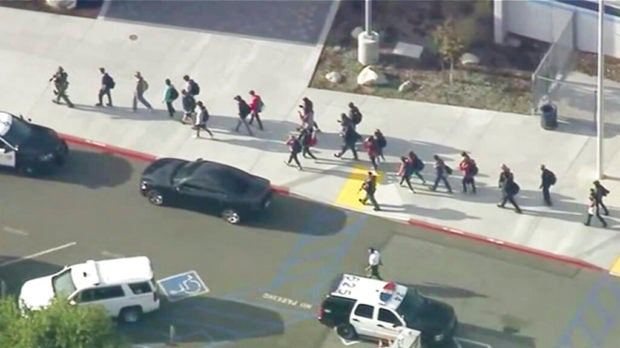 People are lead out of Saugus High School after reports of a shooting on Thursday, Nov. 14, 2019 in Santa Clarita, Calif. The Los Angeles County Sheriff’s Department says on Twitter that deputies are responding to the high school about 30 miles (48 kilometers) northwest of downtown Los Angeles. The sheriff’s office says a male suspect in black clothing was seen at the school. (KTTV-TV via AP)

SANTA CLARITA, California — At least three people were injured Thursday during a shooting at a Southern California high school and a search was underway for the gunman, authorities said.

The department said a male suspect in black clothing was seen at the location.

“If you live in neighborhoods anywhere near Saugus High, PLEASE LOCK DOORS and stay inside. If you see suspect, male dark clothing, in backyards, etc. CALL 911,” the Santa Clarita sheriff’s station tweeted.

White House spokesman Judd Deere said President Donald Trump was monitoring the reports and advised those nearby to follow the advice of law enforcement and first responders.

There were three confirmed patients with injuries, and it was not immediately clear if they were gunshot wounds or other types of injuries, fire spokesman Christopher Thomas said.

Initial reports of at least six injured were likely due to duplicate reports, he said.

Saugus High School and other schools in the area were locked down.

Lines of students were escorted from the school by armed deputies.

One patient was flown to a hospital and two others were transported by ambulance, Thomas said.