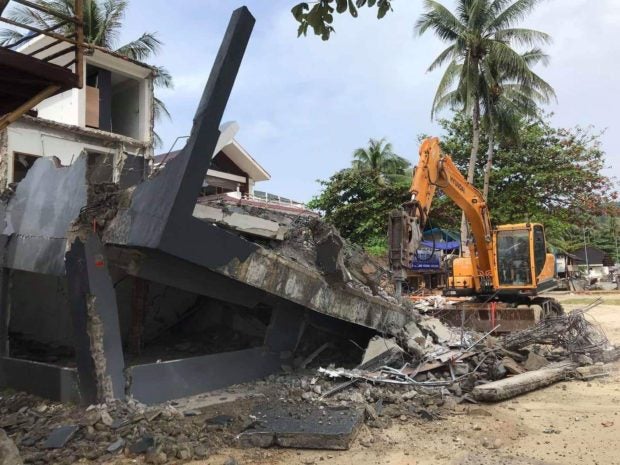 A backhoe tears down a concrete house surf, among the 10 structures that are being demolished by the Boracay Inter-Agency Rehabilitation Management Group for allegedly encroaching on the 30-meter beach easement. Contributor

ILOILO CITY –– The demolition of properties along Bulabog Beach on Boracay Island continued Thursday morning after appeals of residents to authorities were ignored.

A backhoe tore down the concrete building of a surf shop, among the 10 structures being demolished by the Boracay Inter-Agency Rehabilitation Management Group (BIARMG) for allegedly encroaching on the 30-meter beach easement.

The residents and property owners, who have been insisting that they have been compliant with the easement, have appealed to the local government of Malay town in Aklan and the BIARMG to hold off the demolition for a few days until the Kalibo, Aklan Regional Trial Court resolves a pending petition seeking for the issuance of a preliminary injunction.

They have asked for the intervention of President Duterte to temporarily stop the demolition.

“We humbly request for your intervention and we seek immediate action on the matter. President Duterte, we appreciate you are a very busy man, but we are just human beings – and we are hoping you can help us be treated as such by our local government. We trust fully in your governance,” according to a letter to the President dated Nov. 12 and signed by 15 residents and property owners along Bulabog Beach.

Natividad Bernardino, BIARMG general manager, said they would not stop the demolition as there was no legal impediment.

She said the government agencies also had a timetable to implement the rehabilitation activities as mandated by the President, especially a road project along the beach.

She insisted that property owners “were given more than a year and a half” to self-demolish the structures.

“These 10 are the only ones which have not complied. The demolition shows that we are demolishing not just shanties and illegal settlers,” Bernardino said.

Lawyer Salvador Paolo Panelo Jr., son of the presidential spokesperson and legal counsel of the residents, said the demolition was contrary to the President’s directives.

“The President’s order is clear … Executive Order No. 53, Series of 2018 directs the rehabilitation of Boracay ‘in accordance with law’. They shouldn’t thus use the President as a shield for clearly illegal activities such as demolition of properties without due process,” Panelo said in a statement.