UNITED NATIONS – Germany, France and Britain on Wednesday strongly condemned the dozen sets of ballistic missile launches by North Korea since May and urged Pyongyang to engage in “meaningful negotiations” with the United States on its nuclear and missile programs. 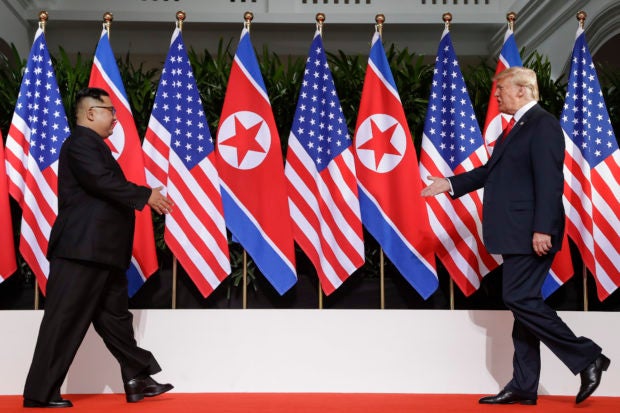 FILE – In this June 12, 2018, file photo, U. S. President Donald Trump, right, and North Korea leader Kim Jong Un walk toward each other at the Capella resort on Sentosa Island in Singapore. North Korea says planned U.S.-South Korean military drills would amount to “throwing a wet blanket over the spark” of nuclear negotiations between Pyongyang and Washington. (AP Photo/Evan Vucci, File)

The three European countries said the tests, “including what appears to be a medium-range missile launched from underwater,” undermine regional security and violate unanimously adopted Security Council resolutions.

They issued a joint statement after Germany’s U.N. ambassador, Christoph Heusgen, briefed the council behind closed doors on implementation of sanctions against North Korea.

The three countries urged North Korea to take “concrete steps” in new talks with the U.S. “with a view to abandoning all weapons of mass destruction and ballistic missile programs in a complete, verifiable and irreversible manner.”

North Korea has ramped up its missile tests in recent months, and experts say the launches are likely to continue as a way to pressure Washington into meeting Pyongyang’s demand for new proposals to revive nuclear diplomacy by the end of December. Diplomatic efforts have largely remained deadlocked since a second summit between U.S. President Donald Trump and North Korean leader Kim Jong Un failed last February.

The German, French and British statement also called on all U.N. member nations “to strictly enforce” sanctions against North Korea.

The Europeans stressed that this must include repatriating all North Koreans “earning income” abroad no later than Dec. 22, as required by a Security Council resolution adopted Dec. 22, 2017.

The joint statement reiterated that the humanitarian situation in North Korea “is the result of the misallocation of resources and restrictions” the government imposes on humanitarian workers and officials. It called on Kim’s government to address food shortages by “prioritizing the well-being of its own people” over the development of weapons of mass destruction and ballistic missiles.

British Ambassador Karen Pierce, the current Security Council president, told reporters there was no statement from the full 15-member council because the consultations were informal. But she called it “a good discussion.”

She said council members are “going to track this important issue very closely.”

There are no plans now for a more formal council meeting or council action on the latest North Korean launches, Pierce said. “but as you know, things can change at short notice,” she added. /gsg