BOSTON – A federal court in Boston has ruled that warrantless U.S. government searches of the phones and laptops of international travelers at airports and other U.S. ports of entry violate the Fourth Amendment. 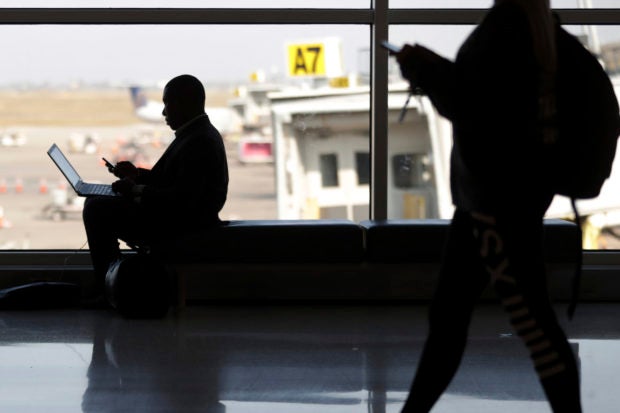 FILE – In this Wednesday, Nov. 21, 2018 file photo, travelers check their phones at Indianapolis International Airport in Indianapolis. On Tuesday, Nov. 12, 2019, a federal court in Boston ruled that warrantless U.S. government searches of the phones and laptops of international travelers at airports and other U.S. ports of entry violate the Fourth Amendment. (AP Photo/Michael Conroy)

Tuesday’s ruling in U.S. District Court came in a lawsuit filed by the American Civil Liberties Union and the Electronic Frontier Foundation on behalf of 11 travelers whose smartphones and laptops were searched without individualized suspicion at U.S. ports of entry.

The ACLU describes the searches as “fishing expeditions.” They say border officers must now demonstrate individualized suspicion of contraband before they can search a traveler’s device.

The government has vigorously defended the searches as a critical tool to protect America.

The number of electronic device searches at U.S. ports of entry has increased significantly, the ACLU said. Last year, the government conducted more than 33,000 searches, almost four times the number from just three years prior.

Documents filed as part of the lawsuit claim the scope of the warrantless searches has expanded to assist in enforcement of tax, bankruptcy, environmental and consumer protection laws, gather intelligence and advance criminal investigations.

The court documents also said agents with U.S. Customs and Border Protection and U.S. Immigration and Customs Enforcement consider requests from other government agencies in determining whether to search travelers’ electronic devices. They added that agents are searching the electronic devices of not only targeted individuals but their associates, friends and relatives.

“By putting an end to the government’s ability to conduct suspicionless fishing expeditions, the court reaffirms that the border is not a lawless place and that we don’t lose our privacy rights when we travel,” Bhandari said in a press release. /gsg