WASHINGTON – President Donald Trump said Tuesday that America now has its eye on a new Islamic State leader, telling the Economic Club of New York that “we know where he is.” 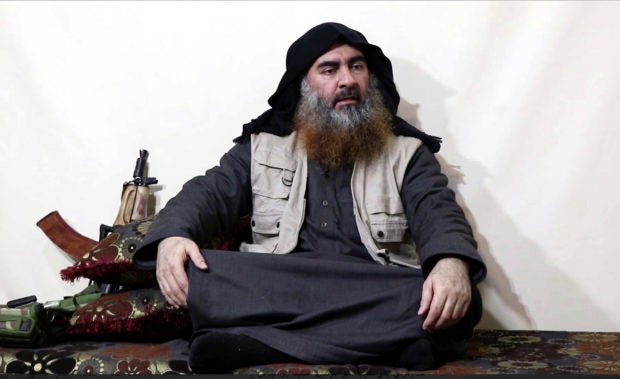 FILE – This file image made from video posted on a militant website April 29, 2019, purports to show the leader of the Islamic State group, Abu Bakr al-Baghdadi, being interviewed by his group’s Al-Furqan media outlet. The IS erupted from the chaos of Syria and Iraq’s conflicts and swiftly did what no Islamic militant group had done before, conquering a giant stretch of territory and declaring itself a “caliphate.” U.S. officials said late Saturday, Oct. 26, 2019 that al-Baghdadi was the target of an American raid in Syria and may have died in an explosion. (Al-Furqan media via AP, File)

Trump didn’t mention the name of the new target, but he is likely referring to Abu Ibrahim al-Hashimi al-Qurayshi, the man who has been named to replace Abu Bakr al-Baghdadi as head of the terror group. Al-Baghdadi took his own life last month as U.S. commandoes closed in on him in northern Syria.

In a speech Tuesday, Trump said the U.S. got al-Baghdadi, then got “his second” and now, “we have our eye on his third. His third has got a lot of problems because we know where he is, too.”

Little is publicly known about al-Qurayshi, and the group typically identifies its leaders using pseudonyms that refer to their tribal affiliation and lineage. The group does not have a clear hierarchy and few details are known about the remaining top leaders.

U.S. Army special operations forces chased al-Baghdadi into a dead-end tunnel on a compound where he had been hiding, and he set off a suicide vest he was wearing.

The “second” that Trump mentioned was likely Abu Hassan al-Muhajir, a close aide of al-Baghdadi and a spokesman for the group since 2016. He was killed in a joint U.S. and Kurdish military operation just hours after al-Baghdadi’s death.

Another “second,” however, could be Fadhil Ahmad al-Hayali, who was described as the group’s No. 2 and was killed in August 2015 by a U.S. airstrike in Iraq.

This is also the second time in two days that Trump has warned about the U.S. targeting a leader of the group. Speaking in New York City on Monday at the opening of the 100th annual parade organized by the United War Veterans Council in Madison Square Park, Trump said “al-Baghdadi is dead. His second in charge is dead. We have our eyes on number 3.”

Al-Baghdadi led IS as it sought to establish an Islamic “caliphate” across Syria and Iraq. It’s unclear what impact his death may have on the group, but U.S. officials and military commanders have said repeatedly that pockets of insurgents remain in Iraq and Syria and are still intent on conducting attacks. /gsg