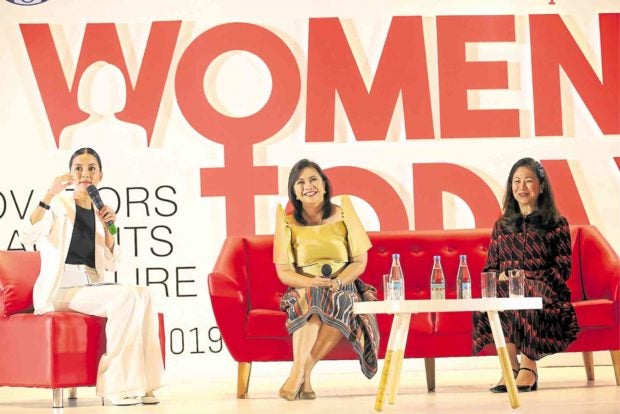 A STRATEGY OF THEIR OWN Vice President Leni Robredo, shown here attending a women’s forum in Pasay City on Tuesday, says she prefers law-enforcement agencies to work out a new strategy in fighting illegal drugs that they can call their own and not dictated to them. —JOAN BONDOC

MANILA, Philippines — Vice President Leni Robredo on Tuesday said she would let law-enforcement agencies look into the adoption of a new strategy in fighting illegal drugs, after Malacañang expressed openness to her proposal to scrap the controversial Oplan Tokhang.

Robredo, who had accepted Duterte’s offer to lead the drug war as cochair of the Inter-Agency Committee on Anti-Illegal Drugs, last week said she wanted to replace Tokhang with another strategy that would not lead to the deaths of drug suspects.

More than 6,600 mostly poor drug users have been killed by police since Dela Rosa launched Tokhang in 2016, for which accusations of crimes against humanity have been brought against the President and 11 of his officials in the International Criminal Court, and which the UN Human Rights Council wants investigated by an international team.

Robredo said she wanted to change the gauge for the effectiveness of the drug war from counting bodies to counting lives improved through the campaign, indicating she was considering a shift in the program’s view of illegal drug use — from crime to public health problem.

On Monday, Malacañang said it was open to scrapping Tokhang if Robredo had a better way of carrying out the campaign to stamp out illegal drugs.

Presidential spokesperson Salvador Panelo said Duterte would give Robredo “everything” to help her fight the drug menace, including additional funds for the interagency committee on narcotics.

On Tuesday, Robredo, talking to reporters on the sidelines of a forum in Pasay City, expressed relief at the Palace’s willingness to give up Tokhang but said she would rather have the law-enforcement agencies work out a more effective program that they could call their own and not dictated to them.

She said scrapping Tokhang would be among the topics for discussion during her meeting with members of the interagency committee on Thursday.

Dela Rosa balked at the idea of trashing his brainchild, saying in a television interview on Tuesday that without Tokhang, 1.6 million drug users would not have surrendered and 130,000 drug suspects would not have been arrested.

He claimed that it was also due to Tokhang that index crime volumes in the country had been reduced by 49 percent.

Although he had no figures, he claimed there had been a big reduction in the number of drug users, and said big “shabu” (crystal meth) laboratories had been shuttered and the supply chain had been disrupted.

As for more funds for the interagency committee, Dela Rosa said Robredo should work with the available resources.

“Work first. Make do with the resources you have with you,” he said, adding that fresh funds could only be sought during the next budget season.

In Malacañang, Panelo said Robredo should ask Congress for a bigger budget for the interagency committee.

“The President and I talked about this and he said the problem is the budget has been submitted,” Panelo told reporters.

“Whatever is indicated in the budget, that’s it. So she should be asking it from Congress. That won’t change,” he said.

Funding for the committee in the P4.1-trillion proposed budget for 2020 is P15 million, which Robredo described last week after accepting her appointment to the panel as insufficient.

On Tuesday, Robredo said the public health approach was the route to take to win the war on drugs.

She said she and the committee were looking at the many best practices in other countries’ fight against narcotics.

“[The countries with] the public health approach were the ones that were able to reach a certain level of success,” Robredo said. “We don’t have to take chances about how to win, because there are a lot of literature already and a lot of best practices.”

She said she met on Monday with officials from the UN Office on Drugs and Crime for a discussion of the best practices in other countries and lessons learned from their strategies.

Robredo said she had requested data from the UN office that could be used in the campaign against drugs here.

She said she would ask the US Embassy in Manila for assistance in intelligence gathering, particulary information about drug lords. Robredo said she would meet with embassy officials on Wednesday.

She would also ask other countries for help in fighting illegal drugs.

“The issue of illegal drugs is not unique to us and we cannot resolve it on our own,” she said.

Robredo welcomed the invitation of the House dangerous drugs committee for her to brief its members on her plans.

“The invitation of the House committee would be an instrument for the people to know where we are heading,” she said.

Asked if she would accept advice from Phelim Kine, former deputy director of Human Rights Watch for Asia, Robredo said she had yet to receive formal communication from him. She refused to comment further on the matter.

On Monday, Kine tweeted that he was willing to come to the Philippines to advise Robredo on how to end the “murderous” war on drugs.

Foreign Secretary Teodoro Locsin Jr. tweeted that Kine would be denied entry into the Philippines to save Robredo from “moral moronism.”