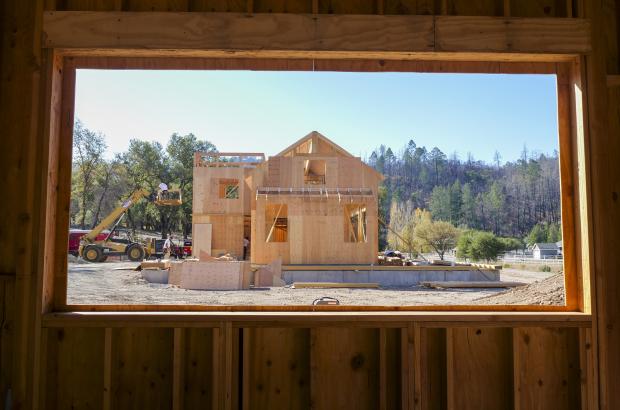 In this photo, taken on Monday, Nov. 4, 2019, members of the Chandler family, father Joel and sons Bobbie and Dale, and their construction crew build a home in Calistoga, California. They have taken on construction jobs while rebuilding and building their own homes in Santa Rosa. The Chandler family home of 20 years and thousands of other structures were destroyed by the Tubbs Fire and other wine country wildfires of 2017. The Chandler family rose from the ashes, rebuilding after losing their longtime family home to in the devastating firestorms that swept across California wine country in 2017. (Photo by Lacy Atkins / AP)

SANTA ROSA, California — Tina Chandler walks outside her home and sniffs the air. “Do you smell smoke?” she asks.

Even when the scent is no longer there, it haunts her. So does the fear of the monstrous winds of autumn, the kind that stoked the wildfires that destroyed her northern California neighborhood once and, in recent days, threatened it yet again. “That wind and the stink,” she says, frowning.

Two years ago, the Chandlers had only minutes to escape before their longtime family home burned to the ground before their eyes. They rose from the ashes to build a new home. Their two sons bought lots down the street, one starting his home.

Then, in recent weeks, they spent tense days watching the orange glow of the Kincade Fire rise behind a ridge near the new homes in their once-flattened neighborhood.

California has long been seen as a golden land of opportunity. But this “new normal” — fires of enormous size and ferocity — is making everyone edgy and causing some to flee.

For the many others who remain, it means a life interrupted by electrical outages, the utility company’s attempt to prevent power lines from sparking fires in the high winds. It means readying “fire Totes” containing important documents and keepsakes.

It is food lines and pop-up assistance centers and having counselors and comfort dogs at the ready when children return to school after evacuation. It is sprinkler installation and built-in tactics to combat fire, trimming vegetation vigilantly and creating “defensible space” around homes, now a regular topic of conversation between neighbors.

This Fountaingrove section of Santa Rosa in California’s wine country was one of the neighborhoods turned to piles of ash and debris by the now infamous Tubbs Fire of 2017. It had been the most destructive wildfire in California history, until last year, when the Camp Fire ravaged the town of Paradise, to the north, killing 85 people.

In the end, the loss from the Kincade Fire was not as great for many reasons — from lessons firefighters learned and more precise wind forecasts to a bit of luck. Fire crews fought like mad to save places like the town of Windsor, just north of Santa Rosa, but were unable to stop the flames from overtaking some homes and other structures, including an old general store and post office built in 1869 in Healdsburg that had become the main building for the Soda Rock Winery.

After the fire, Soda Rock owner Ken Wilson measured the remaining stone facade, determined to save and reinforce it to withstand earthquakes. Signs on the nearby roadside announced wine tastings: “RECOVERY BEGINS!” Many have stopped in.

“This is what I call resiliency!” one customer said as he arrived.

Wilson, a Canadian who moved to Sonoma County in 1979, explained that this was how he started tastings with his first winery in 1998 — “a plank and two barrels and we were in business.”

Emily McCutchan, a fifth-generation resident of Sonoma County who lives in Windsor, stopped in to see the damage at Soda Rock, having just returned from a trip to Italy. She cried when she saw the ruins and met Wilson with an embrace. “It’s so sad,” she said.

This new normal everyone talks about now is hard to take. But she said she won’t leave the county during fire season again. She will stand with her people. “It’s your home, your community, your family,” she said. “You don’t just run when things get hard, right?”

Wilson also has watched grapevines come back, even after the fire. The roots go too deep. “Hard to kill a grapevine,” he said.

The ties of the Chandler family — Tina, husband Joel, and their two sons and wives — also run deep here. They own a construction business and, since the Tubbs Fire, have helped rebuild their own neighborhood as well as other homes in Sonoma County.

Son Dale and his wife, Katrina, have purchased a lot across the street from his parents. A few houses down, son Bobbie and his wife, Jenna, are finishing the framing on their own home after work, hurrying to finish the roof before the rainy season begins. They live in a trailer behind the home.

When they came to help his parents evacuate that early morning in 2017, Tina was still in her nightgown and flip-flops because there simply was no time to change. They grabbed their dogs and locked the front door. “We’ll be back,” Tina thought. Then, stuck in the crush of evacuee traffic, they watched in horror as flames engulfed their family home of more than 20 years.

“It wasn’t so much tears. It was physical sickness,” Bobbie Chandler, now 27, said, describing how he and his wife both vomited out the windows of their truck in response. “Because of the adrenaline, the smoke, we lost all control.”

So when a new evacuation order came in late October, Bobbie’s gut twisted again as he and his family watched that orange glow of the Kincade Fire.

“As soon as I saw that glow, my phone rang,” Bobbie said. “And it was a sheriff deputy friend of mine saying that there was a fire in Geyserville.”

Most of the family and some neighbors decided to stay this time, ignoring an evacuation order since the fire was farther away. They took three-hour night watch shifts. Joel Chandler and others used water from a swimming pool and other sources to wet the ground around their homes and the wood of Bobbie and Jenna’s unfinished house. Bobbie and Jenna stayed up for 48 hours straight, fearing the power lines that swayed above their trailer might snap.

The stress generally brought people together.

Now on Wednesday nights, residents gather for a wine party. Many younger families have moved in, now able to live in a place that was, for them, unaffordable before the fires. Bobbie is reluctant to talk about silver linings “because there’s people and things that can’t be replaced.”

“Healing takes a long time, and it happens in a lot of ways,” he said. But he’s grateful to be here, with his family all on one street. For him, they — more than the house — are home.

His mom wants to stay, too, but she hasn’t been sleeping well since the Kincade Fire dredged up old anxieties.

This isn’t the mellow California she’s always loved. “I don’t want to live scared,” the 54-year-old mom said. “But where would we go?”

The night of the fire she packed a framed family photo from Dale and Katrina’s wedding, along with a box of kukui nut necklaces that a friend had sent from Hawaii after they lost their home. “I know that sounds kind of silly,” she said of the black shiny nuts, which represent hope and renewal. “But this was their way of saying ’We’re going to be all right.’”

She still thinks about items they lost in the 2017 fires that can’t be replaced, like her boys’ baby books. She can recall their birth weights, but not their lengths. “As a mom, you want to remember that stuff,” she said, her eyes filling with tears.

She paused for a moment as she stood in her new kitchen. And she asked again: “Do you smell smoke?”

Read Next
Sandiganbayan acquits former solon Thomas Dumpit Jr of graft
EDITORS' PICK
Get exciting deals and discounts when you download the new McDonald’s App
SM continues to send relief assistance to remote towns in Batangas
Palace: US Senate move also made Duterte junk VFA
Year of metal Rat: ‘Rooster’ Duterte warned of scandals
China expands lockdown against virus, fast-tracks hospital
‘A greener, cleaner tomorrow’: A how-to guide for Filipinos who want to help with today’s energy crisis
MOST READ
No time for revelry; Tagaytay instead plans for alert level 5
Palace: US Senate move also made Duterte junk VFA
Dina Bonnevie on Coney Reyes: We have forgiven each other
Countries with confirmed cases of coronavirus
Don't miss out on the latest news and information.