Mulvaney to file his own impeachment lawsuit, lawyers say 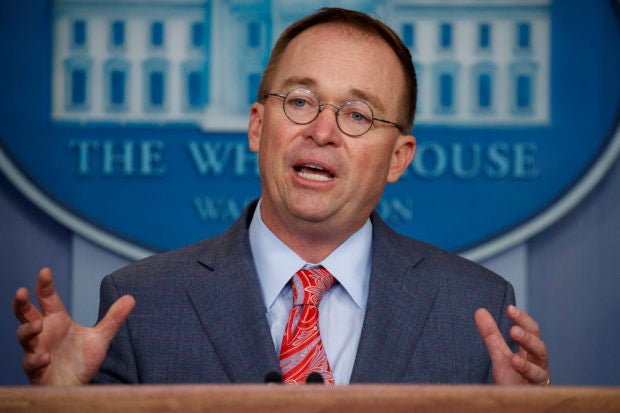 WASHINGTON — White House acting Chief of Staff Mick Mulvaney plans to file his own lawsuit over testimony in the House impeachment inquiry, withdrawing his bid to join a separate case filed last month by a former Trump adviser, his attorneys said Monday.

The plans were revealed in a court filing in which Mulvaney abandoned his earlier request to become part of a suit by Charles Kupperman, President Donald Trump’s former deputy national security adviser.

Lawyers for Mulvaney had asked Friday evening to join that lawsuit, saying his case presented similar legal issues to that of Kupperman. But they switched course following a conference call Monday afternoon in which a federal judge said he was not inclined to grant the request. The lawyers said they instead plan to file their own lawsuit, seeking the court’s guidance on whether Mulvaney must follow a subpoena from Congress directing him to testify or an order from the White House that he not appear.

Mulvaney faced opposition from lawyers for both Kupperman and House lawmakers in his bid to join the lawsuit, underscoring the lack of a unified approach from Trump administration officials in responding to the impeachment inquiry, which enters a critical public this week with public hearings. Several officials have already testified behind closed doors in defiance of White House orders, while others have skipped their scheduled appearances.

At issue Monday was whether Mulvaney could join Kupperman’s lawsuit, which asks a court to decide on compliance with congressional subpoenas and to resolve conflicting directives from the White House and Congress. Like Kupperman, Mulvaney has defied a subpoena from impeachment investigators. His lawyers argued on the conference call that there was “an incredible amount of overlap” in the two cases since both men have been close advisers to the president and in regular contact with him.

“Your Honor, we’re talking about the same impeachment inquiry, the same type of subpoena, in connection with the same kind of work at the White House, as close personal advisers of the President,” said Christopher Muha, a lawyer for Mulvaney.

The Associated Press obtained a transcript of the call.

Kupperman’s subpoena has since been withdrawn and the impeachment inquiry seems to be moving on without his testimony. On Monday’s call, U.S. District Judge Richard Leon asked Muha what would happen to his case if he determined that Kupperman’s lawsuit was moot now that the subpoena has been withdrawn.

Muha said, “Our suit would continue, we believe, because we would have a live subpoena.”

Cooper also represents former national security adviser John Bolton, who did not appear for a scheduled interview last week and who has not been subpoenaed by the House. Cooper has previously said that Bolton would not testify without a subpoena. Any House-issued subpoena would put him in the exact same situation as Kupperman.

In a court filing Monday and again on the call, Cooper cited what he said were key distinctions between Mulvaney and Kupperman’s situations, including that Mulvaney has already spoken publicly about issues central to the impeachment inquiry. On October 18, Mulvaney acknowledged during a White House briefing that Trump’s decision to hold up military aid to Ukraine was linked to his demand that Kyiv conduct politically charged investigations that the president sought. Those comments create a “serious question” as to whether Mulvaney waived the immunity protection by speaking publicly.

“Plaintiff, in contrast, has never publicly disclosed information relating to any of his official duties, including the matters under investigation by the House,” Cooper wrote of Kupperman.

House Democrats separately opposed Mulvaney’s effort to join the suit. They said Kupperman’s case is moot since the subpoena directing him to appear has been withdrawn.

At the end of the call, Leon said he was not inclined to rule in Mulvaney’s favor but also noted that he could file his own suit. Mulvaney’s lawyers indicated soon after that they would do exactly that. /kga