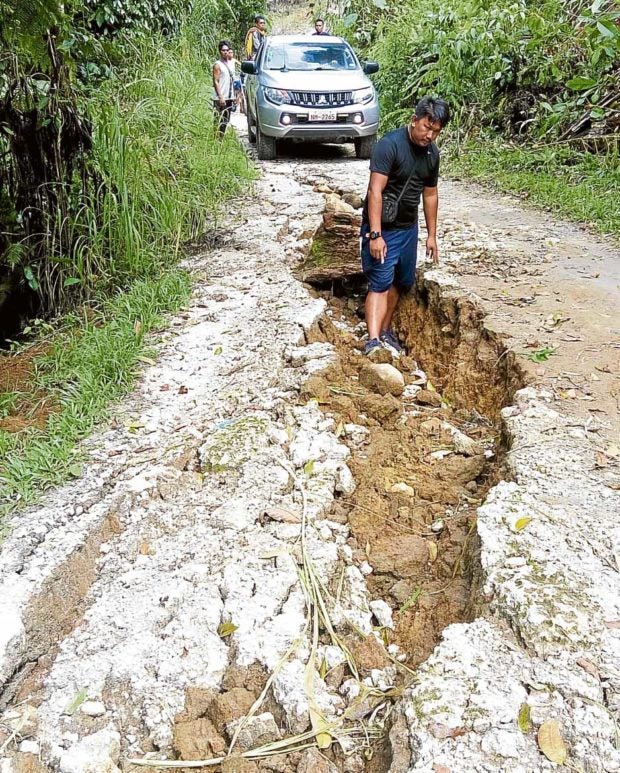 MAKILALA, Cotabato, Philippines — Pablito Herarman, a 57-year-old rubber tapper from New Batasan village, searched for whatever valuables remained in his home that was wrecked by the 6.5-magnitude tremor on Oct. 31.

Around him were houses that were also leveled by the temblors.

A trip up the hinterlands of Makilala, hardest hit by the series of quakes last month, shows a pattern of destruction where the closer the communities are to the foot of Mount Apo, the greater the destruction wrought by the quakes.

Geologist Jeffrey Perez, supervising science research specialist of the Philippine Institute of Volcanology and Seismology (Phivolcs), said the town appeared to be most affected because the fault that moved during the last earthquake was close to it.

What scared villagers the most was the appearance of large cracks — at times a meter wide and stretching kilometers — on the ground after last month’s series of magnitude 6 earthquakes that jolted Cotabato province and left a trail of destruction in neighboring Davao del Sur province and other areas in Mindanao.

Carlito Onor Jr., 33, a rubber tapper in Luayon village, also in Makilala, said his family left the village as large cracks began to appear on the ground and stretched all the way to Santo Niño village about 4 kilometers away.

“We could have stayed, but our place has turned dangerous,” said Onor, whose whole family was among the 600 villagers from Luayon taking shelter at Malasila Elementary School in Makilala.

Perez had been in the area for weeks to observe the effects of the quake and help explain this to the displaced residents.

He said no fault ruptured on the surface during the series of quakes along the Cotabato Fault System. Surface rupture is the term that geologists use to describe when movement on a fault deep within the earth breaks through to the surface.

He said the huge cracks that people saw were what he called tension cracks.

“For this earthquake, we did not see a fault that ruptured on the surface, most of these cracks are tension cracks if it’s on the mountain range, or lateral spread or liquefaction—if it’s on a flat ground near the water or swampy area,” Perez said, referring to the cracks found in the upland areas of Makilala, Kidapawan City, Tulunan in Cotabato province, and in Magsaysay, Davao del Sur.

“The fault passed through the concrete flooring of my house, traveled through the yard where it sliced open the grave of my child and traversed the entire village,” a resident of Magsaysay said, referring to the cracks that were mistaken for the fault itself.

Perez said “what’s dangerous about these cracks [is that] they might finally give way when another earthquake strikes or when there’s heavy rain, they might cause a landslide.”

A team of scientists from the Phivolcs and the Mines and Geosciences Bureau has already assessed some areas where there were tension cracks— which the local governments should be alerted to, so they may order a forced evacuation of residents, he said.

Perez said the October quakes in the Cotabato Fault System were caused by the movement of two local faults—the M’lang and the Makilala.

Hazard Hunter Philippines, an app that plots the faults in the country, shows five faults within the Cotabato system: the M’lang fault, which stretches some 20 km from Pulang Lupa village in M’lang down to Banayal village in Tulunan town; the Makilala fault, stretching less than 20 km from Kawayanon village in Makilala down to the area near Paraiso village in Tulunan town; the Makilala-Malungon fault, which extends 65 km from Makilala to Sarangani province; and the North Columbio and South Columbio faults.

Perez’s team is observing the Makilala-Malungon fault, the longest in the Cotabato system, as this fault may cause a 7.2-magnitude quake.

He also pointed out that in cities and urban centers, no building should have collapsed below an 8 magnitude earthquake, if builders strictly adhered to the National Building Code.

According to the National Disaster Risk Reduction and Management Council, 20,704 houses were damaged in Makilala.

In Herarman’s village of New Batasan, most of the houses were made of concrete with galvanized iron sheets for roofs nailed on wooden purlins.

Herarman said his home was a work in progress, with improvements introduced, like concrete walls, each time his family is able to save enough to buy materials. This is the typical way houses are built in the community, he said.

In Kidapawan, portions of Ilomavis, Balabag and Perez villages were declared “no-build zones” because of threats of landslides, according to Psalmer Bernalte, city disaster risk reduction and management officer.

“Even without an earthquake, if we check the geohazard map, these areas are landslide prone and mountainous areas and [the] slope [were] a big factor,” Perez said.