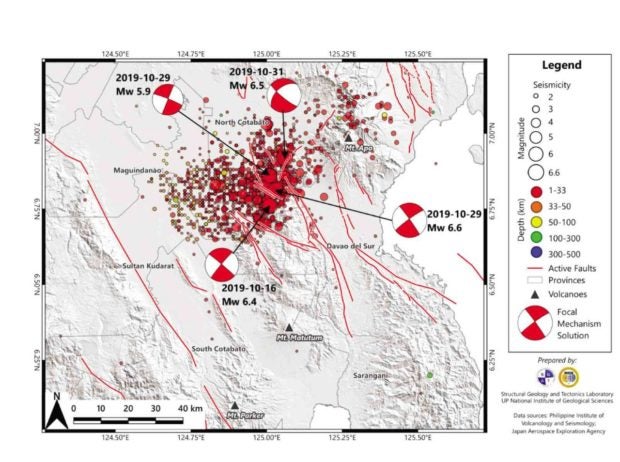 Seismotectonic map of the Oct. 16-31 temblors

MANILA, Philippines — The series of earthquakes that struck Mindanao between Oct. 16 and Oct. 31, with magnitudes 6 or greater, should baffle laymen and scientists alike — because several characteristics of the seismic events remain poorly understood.

For instance, why is it that the four largest events are of the same order of magnitude within the range of 6? During an earthquake, theory dictates that aftershocks that follow the main shock should be of lower magnitudes.

In recent years, earthquake scientists have employed the principles of the Coulomb stress transfer (CST) theory to explain the behavior of seismic events. CST derives from the friction experiments of the 18th century French military physicist Charles-Augustin de Coulomb, who is actually better known for his contributions in the field of electricity.

The theory revolves around the idea that as a fault slips, the generated earthquake is a manifestation of the release of stresses that have accumulated on that fault over time. That segment of the fault is thus said to have experienced stress decrease and becomes an unlikely location of the next immediate earthquake.

While being released, however, the stresses do not disappear but instead transfer to another location — an area said to experience stress increase. If a fault exists in the stress increase region, then that fault is likely to be the next to slip and generate the next earthquake.

Using the CST principle, one possible explanation of the closely spaced October earthquakes is a mechanism called earthquake triggering, which states that an earthquake generated by a certain fault can trigger the movement of a nearby fault consequently generating the next earthquake.

In some earthquakes, fault slippage may occur in two or more stages, producing multiple main shocks called doublet earthquakes. Doublets can be differentiated from aftershocks as having similar order of magnitudes. The four 6-magnitude earthquakes of October may thus be interpreted alternatively as doublets.

Stress changes may also impact on volcanic centers. For instance, some earthquake studies insinuated the possibility of associating the 7.8-magnitude North Luzon Earthquake of July 16, 1990, whose epicenter was located in Cabanatuan, with the eruption of Mt. Pinatubo located about 80 km away, less than a year later on June 13, 1991.

Similar cases have been reported in other countries, such as in Italy, Turkey and New Zealand with similar geological environments, defined by active faults coexisting with volcanoes in the same region.

The preliminary CST model of the Cotabato earthquakes indicates a stress increase underneath Mt. Apo, consistent with the clustering of aftershocks underneath the volcanic edifice after the 6.5-magnitude event of Oct. 31.

Regardless of earthquake mechanism, damage has been intense and spread over a wide area no less than 100 km in diameter from as far east as Davao City to as far west as Kidapawan City in Cotabato province, and beyond. The intense damage to infrastructure may be attributed to the succession of the four 6-magnitude earthquakes occurring over a short period of time.

Whether they were aftershocks or not, the weakening effect of successive earthquakes is cumulative, much like the effect of the successive punches of a boxer on the face of the opponent—the first few punches may not hurt, but the next ones will certainly cause significant damage to the face especially when thrown in close succession.

During the October earthquakes, buildings that initially sustained damage from the first event on the 16th eventually collapsed after the cumulative effect of the succeeding quakes on the 29th and 31st.

Among the major challenges in earthquake studies is determining which fault caused which particular earthquake. In the case of the October earthquakes, the Philippine Institute of Volcanology and Seismology identified at least five faults in the region as possible culprits. One way of identifying the culprit fault is by using what seismologists call a focal mechanism solution that provides two possible fault choices, then asking a geologist to verify in the field which of those two faults is responsible.

The most convincing evidence is a surface rupture that manifests when the fault breaks the ground surface over a considerable distance. However, the surface may not always break especially when the quake’s energy is not strong enough or when the focal depth is too deep. In such instances, earthquake scientists resort to other methodologies.

One of these methodologies is called interferometry—where two or more satellite images of the same place, but taken at different times, are superimposed and their phase differences calculated and plotted as interference patterns.

In general, the interferometric synthetic aperture radar (InSAR) technique is widely used in the geosciences, and in earthquake studies in particular because it can determine the amount and direction of displacement of the ground before and after an earthquake at centimetric precision. InSAR thus provides a way to decipher the mechanism of an earthquake-generating fault.

InSAR data sent in by JD Dianala, an instructor at the University of the Philippines National Institute of Geological Sciences (UP-NIGS), suggest ground deformation related to a dextral fault (i.e. fault movement allows one block to move to the right relative to the other) that trends north-easterly, the same trend as the orientation of the earthquake epicenters. These data sets are now being used to assist a UP-NIGS geological team find the trace of a possible ground surface rupture.

As I finish writing this piece, I will be joining the UP-NIGS team deployed as part of a concerted humanitarian effort by UP through the UP Resilience Institute, and hope to find in Cotabato more arguments to better understand the series of earthquakes that seemingly defies theory.

Mario A. Aurelio, Ph.D., is a professor at UP and director of UP-NIGS where he also heads the Structural Geology and Tectonics Laboratory.)